As Microsoft gears up for the first release of Project Spartan, the company has detailed Adobe's contribution to its next-gen browser.

Adobe is a major contributor to the open source WebKit (Safari), Blink (Chrome, Opera), and Gecko (Firefox) browser engines, but like everyone else, it's been locked out of Internet Explorer.

"As a result, Adobe improved the web platform in other browsers, but couldn't bring the same improvements to Microsoft's platform. This changed a few months ago when Microsoft made it possible for the Adobe Web Platform Team to contribute to Project Spartan," explained Bogdan Brinza, program manager with Project Spartan.

Adobe has contributed to Project Spartan, specifically in layout, typography, graphic design, and motion, Microsoft said. Project Spartan is expected to ship in the next update to the Windows 10 Technical Preview. 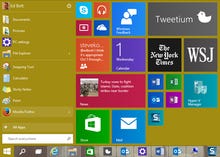 Hands-on with Windows 10: Installing the Windows Technical Preview For any Windows 10 version, including version 2004 (aka the May 2020 Update), here's everything you need to know before you repair, reinstall, or upgrade -- including details about activation and product keys.

Several new features in the Internet Explorer rendering engine released as part of the first Windows 10 Technical Preview come courtesy of the Adobe and Microsoft partnership.

"With this feature, a web developer can specify an optional location between the colour stops of a CSS gradient. The colour will always be exactly between the colour of the two stops at that point. Other colours along the gradient line are calculated using an exponential interpolation function as described by the CSS spec," Bogdan Brinza, program manager with Project Spartan, said.

Developers can test out the new rendering engine by installing the technical preview and enabling Experimental Web Platform Features in the 'about' section, under 'flags'.

The new rendering engine's full support for blend modes, bringing IE up to par with other major browsers, is also thanks to Adobe.

The partnership is part of Microsoft's effort to use a more open stance for its web platform.

"We've talked often about our goal to bring the team and technologies behind our web platform closer to the community of developers and other vendors who are also working to move the web forward," said Brinza.

"In the same spirit of openness, we've been making changes internally to allow other major web entities to contribute to the growth of our platform, as well as to allow our team to give back to the web."