Amazon is building a smartphone with a 3D display, The Wall Street Journal reported on Thursday.

Along with the news of a smartphone with a 3D display, Amazon is also set to expand its range of gadgetry — an audio streaming device, and not one but two smartphones. One will feature the 3D technology while the other will be a low-end budget device, ideal for emerging markets and new smartphone users. 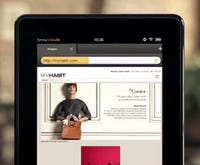 Amazon in smartphone 'testing' phase; Can it tempt the enterprise?

If the retail giant can build a business case for the anticipated smartphone, could it take the coveted third-place market share slot and challenge the Apple and Google duopoly?

The 3D display smartphone will, according to the Journal's sources, will feature eye-tracking technology similar to that of Samsung's Galaxy S4, displaying imagery that will "float" above the screen like a hologram. Users will be able to navigate through the phone with their eyes.

But the streaming set-top box is less known about. Previous reports pegged the device as being an Apple TV competitor, by allowing users to stream video and movies from Amazon's own online retail range — perhaps others, such as Netflix — with the device.

The devices are part of a wider push into developing Amazon's own hardware strategy. Known as the "Alphabet Projects" — with each device known by its Project A, B, C, D and so on codenames — the elusive devices could be announced or launched in the coming months.

Or, if the devices struggle due to performance, financial or other concerns, some or all of the devices may be scrapped entirely.

Reports that Amazon is building a smartphone are not new. The retail giant has reportedly been working on a device for months, if not around about the year mark. The move away from its Kindle range of tablets to smartphones would be a logical progression.

In early 2012, rumors began to leak out of Amazon's headquarters that a phone was on deck. The company was testing the device  as early as July last year, just a day before the news broke that a former Windows Phone executive joined the company , spurring on further rumors that Amazon was in fact building a smaller shiny rectangle of its own.

An Amazon spokesperson declined to comment to the Journal.