Amazon will be dodging the usual solution to the problems presented by the world's next leap second, ditching civil time for 24 hours and creating its own version of time.

A leap second is an extra second added to compensate for the fact that the orbit of the earth around the sun is actually a tiny fraction of a second longer than 24 hours. Almost without fail, the arrival of a leap second, which happens every few years, causes some companies' computers to malfunction: a recent leap second which occurred in June 2012 caused issues at Reddit, Qantas, Mozilla and others, for example. The next leap second will arrive at midnight on June 30 and many systems will handle it by adding an extra second to their clocks, which will appear as 23:59:60. 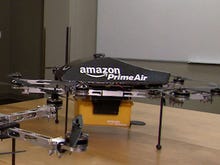 ​'Get the drone to drop the parcel off at my boat': Amazon details ambitious delivery plans

With a new FAA drone license in tow, Amazon has received a patent for its Prime Air drone delivery system.

But, as AWS' chief evangelist Jeff Barr wrote on the AWS blog on Tuesday, not all systems are properly coded to handle the ':60' notation, including some of AWS' backend systems and AWS Management Console.

"The AWS Management Console and backend systems will NOT implement the leap second. Instead, we will spread the one extra second over a 24-hour period surrounding the leap second by making each second slightly longer," Barr said.

Instead of adding a second on June 30, for 12 hours on each side of the leap second, the company will stretch out each second in AWS clocks to "1+1/86400 seconds of 'real' time", Barr added.

That means for a 24 hour period, Amazon will enter its own time and fall out of synch with Universal Coordinated Time (UTC) by as much as half a second. By 12am on July 1, AWS clocks are expected to be synchronized to UTC again.

Users of Amazon's EC2 instances will have to make the adjustment themselves by using public time services that rely on Network Time Protocol (NTP) or Microsoft's own time.windows.com.

Google developed a similar fix to skew time ahead of leap seconds, called a "leap smear". It works by modifying its NTP servers to gradually add a few milliseconds to its services so that it has already factored in the leap second by the time it arrives.