Home routers are the backbone of many consumer and small business setups across the world. Despite their importance, they're largely ignored until they go down or start creaking. For one Norwegian startup, home routers are ripe for improvement.

Domos is aiming to smarten up user experience for home routers. It's working on automated and dynamic router configuration, based on machine learning and making use of long-term traffic statistics stored in the cloud, combined with a lightweight software agent on the router. The company's vision has already attracted the attention of major wi-fi router chip vendors.

The two Domos founders "sat together a couple of years ago and were annoyed by our bad home networks, especially the wireless part," Bent Erik Skaug, one of those co-founders, told ZDNet. "We had good enough broadband connections, which should be able to carry all the load. After a while we realized that some of the problems were in the wi-fi part of the home network.

"At the same time, we were looking at what started to happen with the Internet of Things, where the home network isn't just a network for a couple of PCs anymore, but it's started to serve a multitude of different wireless devices, such as home alarms or automation systems, which all depend on a network that's in good working order."

"Much of the solution lies within the router. We spent a year getting to understand the value chain from chip vendors to the OEMs, who manufacture the product, and the ISPs, who buy and deploy the routers in users' homes. The problem with this is that the routers become just a cost item in the ISPs' world, so they squeeze the prices on these products as much as possible. This results in bad routers - they are cheap, but they aren't any good," he said. 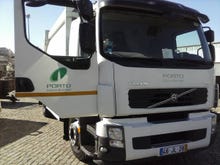 A clever experiment in Portugal is showing how adding new technology to the city's vehicles - including garbage trucks - can be put to new uses.

"If you have a smarter router, which does things correctly, you don't need a very powerful one in order to get a good effect and a well-functioning network. The problem, as we see it, is that today's routers aren't smart enough. They push traffic to and from, but they don't take history into consideration. The firmware is relatively old [and has] old automatic functionality. When I start to stream Netflix or YouTube today, they don't have good enough functionality to handle this in combination with the other needs I have elsewhere in the same home network," Skaug added.

Domos' product is based upon the open source router operating system OpenWRT. Domos has added its own lightweight software component to the router, which collects traffic statistics and assists in making changes to the router's configuration. As well as the software, Domos offers a Microsoft Azure-based cloud service, where statistics on the long-term use of the router are stored, and analytics and machine learning are brought to bear on the data. The result is a router that's configured automatically, based on usage and local wi-fi conditions at the user's location.

"The core of what we do is to put a small software component into the router. This software sends a lot of data up to our cloud solution, including radio noise, signal strength of the different devices in the network, the continuous speeds you've got from the different devices to the internet, the amount of data sent to and from the devices and the network. We store this data in our cloud system, where we run a lot of statistics and machine learning on them.

"We can detect lots of different patterns from that, and based on them, we have a rules base which will generate configuration commands that we send back down to the router. For instance, if the router sees radio noise on a channel over time - perhaps not all the time, but regularly over time - our analysis will show that fact, and automatically reconfigure the router to another wi-fi channel to avoid it," Skaug said.

Many of the settings the Domos product can take care of, Skaug said, are configuration options available through most routers' user interfaces. One example is capping the maximum bandwidth allocation for a specific application, like YouTube or Netflix, in order to avoid it eating up all available bandwidth. If another user tries to get on the network at the same time, the session suffers under the load from the previous session.

By capping the the bandwidth at such a level that neither the streaming session nor the second session are disturbed by each other, the network performs better for everyone. It's an option many routers offer, but it isn't something most consumers can set up on their own.

"It's possible to do a lot of the adjustments we do in the router manually yourself, but then you're a more advanced than average user. Our contribution is to do these adjustments automatically and dynamically when needed, and for every user who uses our solution," Skaug said.

Domos is targeting ISPs and chip vendors with its product. Even though ISPs are looking for ever-cheaper home routers for their customers, they come with a hidden price tag.

"One ISP I was speaking with recently told me that 80 per cent of their support issues are related to wi-fi," Skaug said. Any product that can help with that has the potential to save ISPs' resources, and in turn improve their bottom line.

It has an effect further up the value chain as well: router chip vendors are competing for the ISPs' business, and want to deliver higher value for their partners.

"We are talking to major chip vendors in the US, because we want to get our software into the products that the chip vendors are delivering to the OEMs. We also want to join with the chip vendors when they approach the ISPs. We have close discussions with their marketing departments," Skaug said, but declined to name the vendors in question.

These days Domos is giving away 100 routers to Norwegian users, as a pilot project to test that its product scales properly. The next step is to prove it in an ISP environment, and Skaug told ZDNet "one or two ISPs" will be running a trial later this year.

Join Discussion for: An end to your wi-fi pain is in sight: The...