WiFi is a wonderful thing. Turn on a laptop, connect to a SSID, and you're online. Sure, there are overheads, and a wired connection will be faster, but wireless internet is just so useful.

But there is a downside: it's often limited (with very little backhaul to the rest of the net) and it can be very expensive to use. This week's Google IO event was characterised by poor WiFi performance as 5000 laptops tried to connect to the same few dozen access points, resulting in an electronic gridlock that made the M25 at rush hour look speedy - especially when everyone turned on the conference tablets for the first time...

That's one reason why pocket WiFi 3G hotspots are so popular. Turn one on, and you're online, using your own bandwidth and your own secure connection that's not traversing an unknown network infrastructure. They too have a downside, too many in one place and there's no cellular connectivity, let alone no WiFi bandwidth (resulting in incidents like the one where NVIDIA CEO Jen-Hsen Huang ended up pleading with journalists to turn off their devices at his company's CES press event earlier this year). So it wasn't surprising to see Google leaving distribution of the second part of its conference giveaway, a pocket hotspot with 3 months of 3G and 4G connectivity to the last couple of hours of the event.

After all, giving them out earlier would have led to the collapse of what little WiFi bandwidth was left. At least they only lost most of the conference spectrum for an hour or so.

Here's what a frequency diagram of the conference airwaves looked like once everyone (and their dog) turned on their hotspots "just to see if they worked", taken using the Android WiFi Analysis app on my Nexus One... 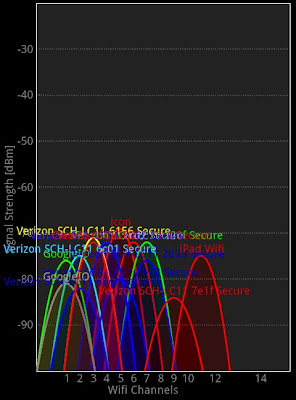 No, you're not going to get on line in that! Having some form of WiFi signal analysis tool is important, as it helps identify possible interference and possible areas of low signal, when setting up a new network, and ensuring that current infrastructure is running well. You can use these tools to pick the right places for your access points, and to choose the right WiFi channels to minimise interference.

If we can't tune networks and hardware, perhaps its time for a little WiFi ettiquette, with little apps running on smartphones to tell you just when it's polite to go online. Or how about putting WiFi sniffers in pocket hotspots, shifting connections to free (or at least with the lowest power) channels, and waiting to go online if there's no free space (and we do have protocols for that, like KA9Q developer Phil Karns' MACA protocol designed for line-of-site mesh networking).

Or perhaps it's time to say that point-to-point wireless communications is a dead end, and instead turn to a world of mesh wireless networks with multiple connections to the wired internet, where your signal is routed and rerouted through an array of low-power wireless connections until it reaches its destination. Polite, open and economical - we all win!