Health and fitness apps are now up there with weather and finance as essential mobile tools, according to a new report from Yahoo-owned analytics firm Flurry.

Health apps and fitness trackers such as Fitbit have been available for several years, helping people more easily measure their lives with mobile devices packed with sensors. 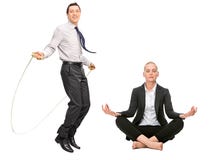 Fitbit is increasingly gaining traction in enterprise wellness programs, and device discounts are only part of the equation. The back-end software and services seals the deal.

While health and fitness are important to many people, apps in these categories have played second fiddle to weather, finance, news, and other information sources that can be gleaned from a smartphone.

But now, just one year after the Apple Watch arrived, health and fitness apps have grown in importance and now match weather and finance apps in enduring popularity, according to an analysis of app loyalty by Flurry.

Flurry looked at 830,000 apps across Google Play and the App Store. To measure loyalty, it compares how often apps in each category are used and how long people continue to use them over a 30-day period.

Health apps now have the highest retention of all app categories in both app stores, ahead of formerly leading categories such as news and magazine apps.

On iOS, health and fitness apps have a retention rate of just under 35 percent, while on Android it's just under 50 percent.

Health apps across both stores are used roughly three times a week. The only app categories that surpass that frequency of use are weather apps and finance apps.

Flurry hasn't updated its App Loyalty Matrix since 2012, some two years before Apple's first health app arrived in iOS 8. Back then, health and fitness didn't even make the matrix with user retention well below categories such as news and magazine apps, and travel.

Health and fitness apps have risen to prominence in an extremely crowded app market. Flurry notes that across the App Store and Google Play there are now three million apps, more than twice the number that existed in 2012.

Most of the 830,000 apps in Flurry's analysis are used once or twice and then never returned to. Other apps, such as those that fall in the news and magazines category, have a loyal user base but are nevertheless not used that frequently, it noted.