Enterprise workers and power users might want to start getting their wallets ready: Evidence of the iPad Pro suggests the larger tablet could be available soon.

Thanks to code in the iOS 9 beta and data analytics from Appsee, it's probably a safe bet that the Apple's big table will have a screen resolution of 2,048 x 2,732. It's expected that those pixels will be squeezed inside a 12.9-inch display.

Unlike prior iPads, word from KGI Securities analyst Ming Chi-Kuo thinks the iPad Pro will offer both a Force Touch screen and an optional digital pen. Kuo expects Apple to sell around 5.5 million iPad Pro tablets by year end, along with up one million stylus accessories.

A larger Apple tablet has been rumored for several years, so what makes this time around any different? 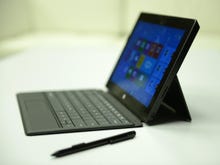 Our first hint was in the split-screen and multi-app support Apple showed off in iOS 9, which arrives as early as September. The feature is limited on older hardware, save for the iPad Air 2, which has more memory than prior models.

I've found with some Samsung tablets and Microsoft's Surface products that the larger the display is, the more useful multiple application support can be. It's especially helpful in the enterprise where information density and using several apps at once is commonplace.

Another reason the time is right for an iPad Pro is the slowing sales of Apple's current iPad line. By offering something new -- particularly targeted at the workplace -- could revive flagging tablet sales; particularly when Apple has a growing partnership with IBM for enterprise apps.