Android device users thinking about buying a new iPhone might want to hold off their purchase for a little while: Apple is about to kick off its first ever trade-in program for Android devices, according to reports.

Following its best financial quarter ever, Apple needs to once again beat analysts' expectations and its new weapon to attract additional iPhone users is a recycling and trade-in program aimed at owners of old Android devices that are considering switching to iOS. 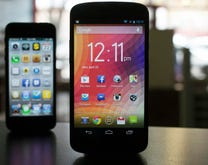 Switching from Android to iOS? 11 tips to help make the move

Thinking about switching from an Android to an iPhone? iOS 8 could be the right time to say goodbye to the Google OS.

According to 9to5 Mac, the program will launch within weeks, and will cover BlackBerry devices too. Sources have also confirmed the program's existence to Bloomberg, and said that it will be open to both BlackBerry and Android switchers.

The new scheme will build on a trade-in program for US consumers that Apple launched in August 2013 to allow consumers to swap old iPhones for new ones, and which was extended to the UK and some markets in Europe later that year.

The US program is slightly different to that in other markets. In the US, iPhone owners can recycle their iPhone for credit that goes towards the purchase of a new Apple handset. Apple staff evaluate the device's condition to determine the value of the credit.

Whereas the US program is solely for the iPhone, the program in the UK and some European countries extends to the iPhone, iPad, Mac, or desktop system via Apple's partner, German company Dataserv. The company evaluates the worth of the device and transfers the amount directly to the customer's bank account.

In both markets, Apple currently offers an additional 10 percent discount on products sold in the Apple Store when customers bring in a phone or iPod for recycling.

ZDNet has asked Apple UK whether the reported Android and BlackBerry trade-in program will be extended to the UK and will update the story is any comment is forthcoming.

As Bloomberg notes, the timing of Apple's Android trade-in program could spell trouble for Samsung, whose Galaxy S6 and S6 Edge devices are set to go on sale next month.

Samsung hopes its new high-end - and high profit - devices can help claw back some of the market share losses it's seen over the past year due to relatively weak sales of the Galaxy S5.

Thanks to the iPhone 6 and 6 Plus, Apple overtook Samsung as the top smartphone maker by shipments in the fourth quarter of 2014 - a period which saw Apple grab almost 90 percent of smartphone hardware profits.

According to market research firm Kantar Worldpanel, 13.9 percent of iOS customers in the US had switched from an Android device in the three months to January 2015.