Apple is reportedly switching to a subscription-based model for its AppleCare and AppleCare+ extended warranties.

The report from AppleInsider, citing Apple vice president Tara Bunch at an internal company meeting, AppleCare will be referred to as "One Apple," which would support all Apple devices a subscriber owns rather than individual devices rather than on a per-device basis.

It comes only a few days after Adobe said it would switch to  a subscription-based software-as-a-service model  for its newly-created Creative Cloud products — which includes Photoshop, Illustrator, Flash, After Effects, Dreamweaver and Acrobat.

There are some other tidbits: devices under warranty that break will be fixed in-store rather than swapped out, replaced, and the older device repaired elsewhere and re-sold as a refurbished mode. Apple could save as much as $1 billion a year, according to the initial report, with even higher savings on deck once the policy is rolled out internationally.

But here's where it gets tricky. 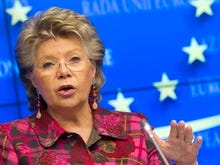 The European Commission is frustrated that its member states have on the most part failed to take action against Apple for flouting EU law, and warns that enforcement must be actioned in order to protect the rights of ordinary citizens.

EU residents already enjoy a free two-year warranty. Apple was in 2011 slapped about by the Italian authorities and fined €900,000 ($1.2m) for misleading its customers over its AppleCare advertising. The bolt-on warranty, available at a premium, fell afoul of EU law.

Apple appealed but lost the case. But the EU didn't loosen its jaw grip on Apple's arm. European Justice Commissioner Viviane Reding said in March  that little had been done, and that member states whose task it is to enforce EU consumer law was "diversified and inconsistent."

Apple eventually changed its policies by tweaking the wording, but some criticized the changes for placing too much of the onus of blame on the customers after they receive their shiny rectangles of multiple sizes.

The EU as a central institution, in the case of Apple's warranties, can't actually do much. But Apple was forced to swallow a bitter pill in its case in Italy. While member states hold the power to criticize and fine Apple, they already have a case in which they can cite in their own judiciaries — the nuances between member state law notwithstanding.

The proof will be in the pudding. Exact pricing and coverage length under the reported plans have yet to be announced. But with Apple keeping its head mostly out of the European hot water, unlike its rivals — both Google and Microsoft have suffered a tongue-lashing by the European Commission in recent years — the maker of shiny rectangles will likely want to keep it that way.

Whether Apple likes it or not, it's in its best interest to keep out of the EU's spotlight. As with repeated cases with the aforementioned rivals, once you're in the EU's crosshairs, you're never coming out of them.

Up until now, Apple has kept its nose clean — or at least to a point where nobody has formally submitted complaints against it, which would be the catalyst the EU would need to investigate the company.

Ergo, it's likely Apple will play ball, at very least to appease its European friends.