Swedish startup iZettle has landed a €5m "strategic" investment from Spain's Banco Santander, which could pave the way for the company to extend its offerings further.

iZettle currently provides smaller merchants in seven European markets a smartphone-based app combined with either a €99 chip and PIN or a €25 chip and signature device to take payments from major credit cards. 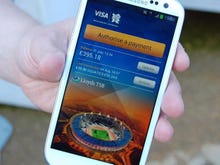 Why mobile payments is like Wacky Races — and why Apple is steering clear So what if Apple hasn't got mobile payments all figured out? So far, neither has anyone else, and that's not likely to change soon.

Besides the technology itself, iZettle is a middle-man between smaller merchants and card acquiring banks, which merchants generally need to be assessed by in order to begin taking credit card payments. iZettle acts like "super merchant" while its customers fall under its agreement with an acquiring bank.

According to iZettle's chief Jacob De Geer, the partnership with Banco Santader and potentially others like will help its transition from local to multinational services.

iZettle established itself as an early player in Europe's mobile merchant payments market, which PayPal recently joined with its similar product Here. The startup now has offices in Stockholm, London, Berlin and Madrid. Most of its transactions outside of Sweden come from the UK, but it has also launched in Spain, Germany, Denmark, Norway and Finland.

De Geer has previously told ZDNet it intends to launch elsewhere in Europe and one market outside of the EU sometime this year, but hasn't said where.

Banco Santander could help iZettle move in a few directions with the bank's claim to be the main financial institution in Spain and Latin America, where its key markets include Brazil, Mexico, Chile, and Argentina. It also has operations in the UK, Portugal, Poland and in the north-eastern part of the US.

"Millions of small business owners and professionals in the markets where we operate need an alternative to conventional credit card terminals," said Ramón Tellaeche, head of Santander Cards at Banco Santander. "We believe iZettle's innovative mobile technologies will be crucial to those merchants' near and long term success."

One way Santander will help iZettle in the UK is by offering customers that tie their iZettle account to their Santander account £50 cash back when buying iZettle's £99 plus VAT Chip&PIN reader. The bank offered a similar but smaller deal to Spanish customers this February.

iZettle released the chip and PIN device in February this year for €49 in Europe, but, De Geer tells ZDNet that was a limited time offer and the price has since risen to the normal €99 rate.

"The €49 price was our introductory price and was for a limited time only. We saw an overwhelming demand for the initial batch and are still seeing a great demand for the Chip & PIN reader. The regular price is a very good offer compared to most traditional card terminals,” De Geer said.

Nonetheless, partners like Santander should help iZettle continue to roll out its readers to cash-conscious retailers at the introductory price, and could act as a lure for banking partners to grow merchant accounts.