Best bang for your buck

How can remote workers make their presence known in their organization? How can enterprises overcome the limitations of video conferencing and enable a level of communication and collaboration that approaches on-site interaction?

Telepresence robots have been on the scene for the better part of a decade, though as global upheavals reshape work and reorient attitudes toward remote participation, the technology may finally be primed to break out of its niche user base and go mainstream. The timing is fortuitous: The market is now mature enough that consumers have choices when it comes to feature set and price point. As companies downsize physical locations and revamp their policies toward distributed workforces, telepresence offers both technological benefits and collaboration advantages that will appeal to some employers and workers alike.

The current telepresence lineup reflects the range of use cases and intended end-users out there, including a handful of models designed for specific fields and workflows, as well as others that fit organizations of any size. They were chosen based on a wide survey of this growing product category and by speaking with company representatives and end-users about their experience.

These are our picks for the best telepresence robots out there right now. 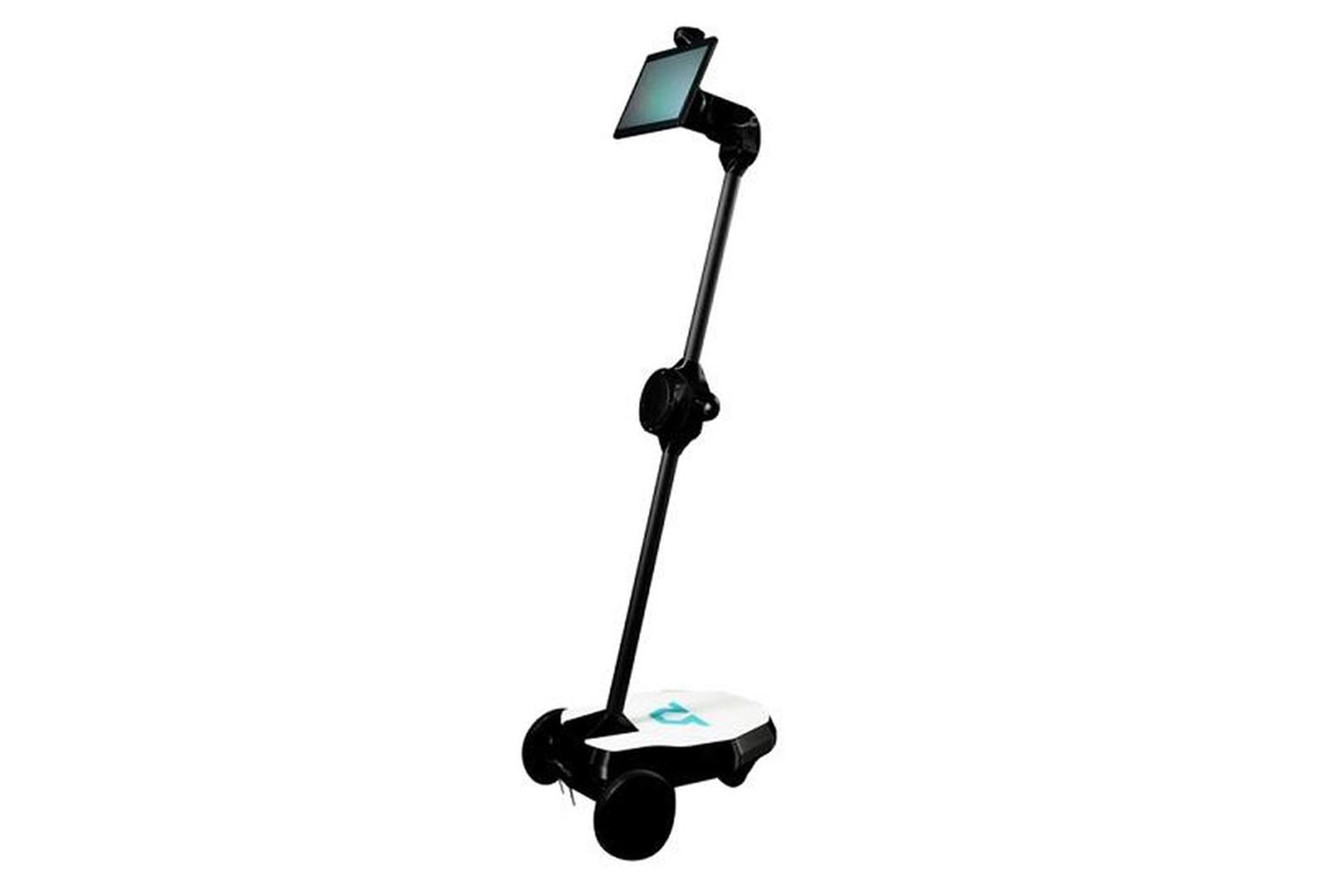 In the battle for low-cost, truly robotic telepresence, OhmniLabs has been giving rival Double a major run for its money.

At under $2699, the Ohmni Robot weighs just 20 pounds and folds up, meaning you can take it anywhere, but still manages all the functionality you need in a telepresence robot. It features wide-angle, low-latency streaming at HD+ resolution and real-time full-resolution zoom to read whiteboards or see fine details at full UHD 4K detail.

A secondary dedicated wide-angle navigation camera lets you see around the base of Ohmni while you're driving, which you can do remotely from just about any standard device. The unit features a bright 10.1-inch screen and integrated Jabra speakerphone for great audio. It doesn't have automatic rising and lowering like Double, but the robot can move its head side to side for natural interactions.

OhmniLabs is also thoughtful about who might use the device, which has dual-band Wi-Fi radio with full 2.4GHz + 5GHz support and optimized background scanning and roaming for large spaces. Full 802.1x support means it should be simple to run on business or school networks.

Best bang for your buck 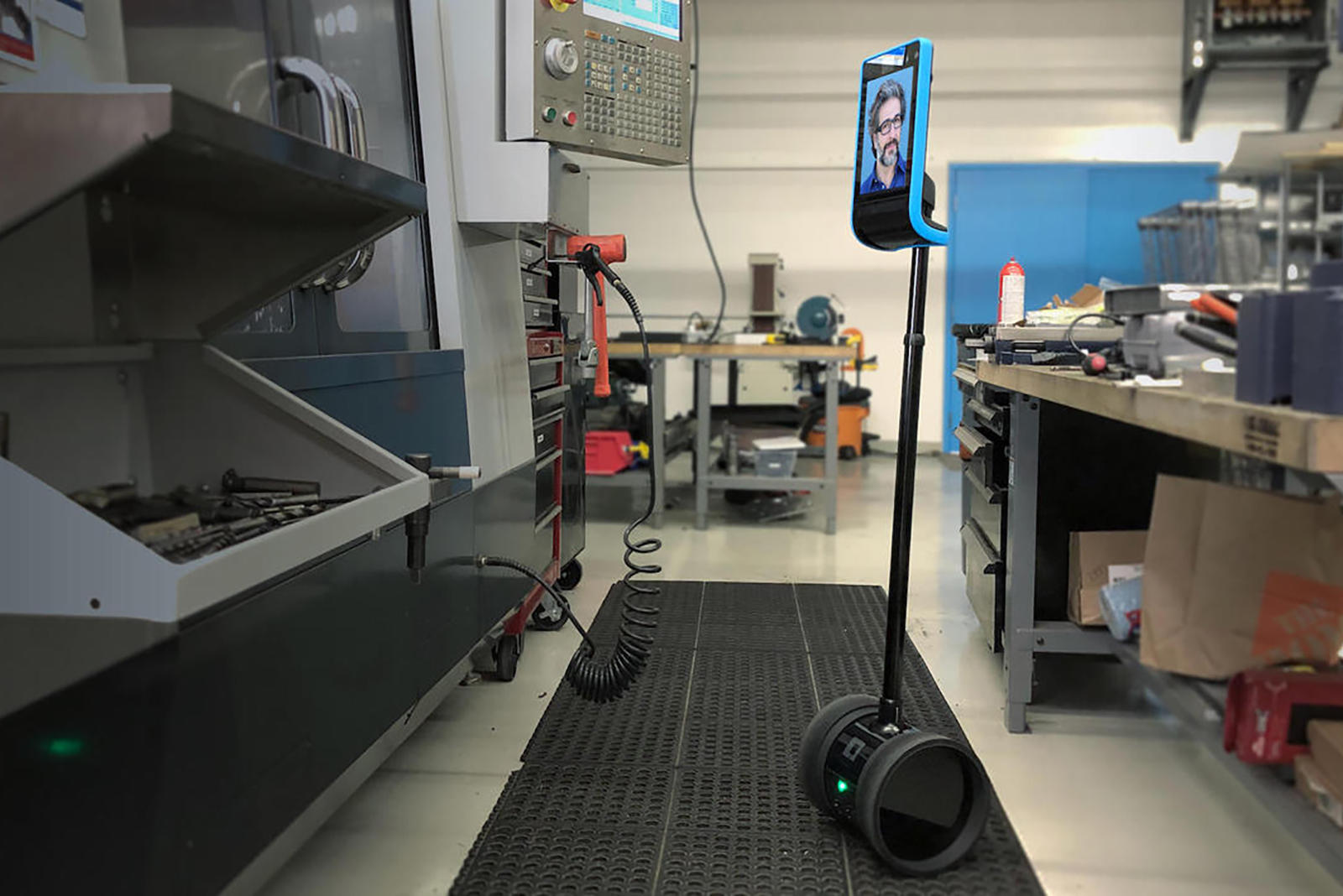 Where the Double 2 used a tablet display, Double 3 replaces the iPad with a fully integrated solution using an Nvidia Jetson TX2 GPU, two Intel RealSense depth sensors, two high-resolution cameras, and a beamforming microphone array. In place of the iPad is an integrated screen and new feature sets, including AR overlays, that really step up the functionality and feature set game of the Double.

Some of those features include a new click-to-drive interface, obstacle avoidance, and pan/tilt/zoom video, all of which contribute to a fully immersive remote experience that's still intuitive to use. Perhaps the biggest functionality upgrade is the addition of mixed reality overlays.

In Double's version of mixed reality, virtual 3D objects are added into the video stream to appear as if they're in the real world. Virtual objects include helpful waypoints to make the video feed more informative during navigation. 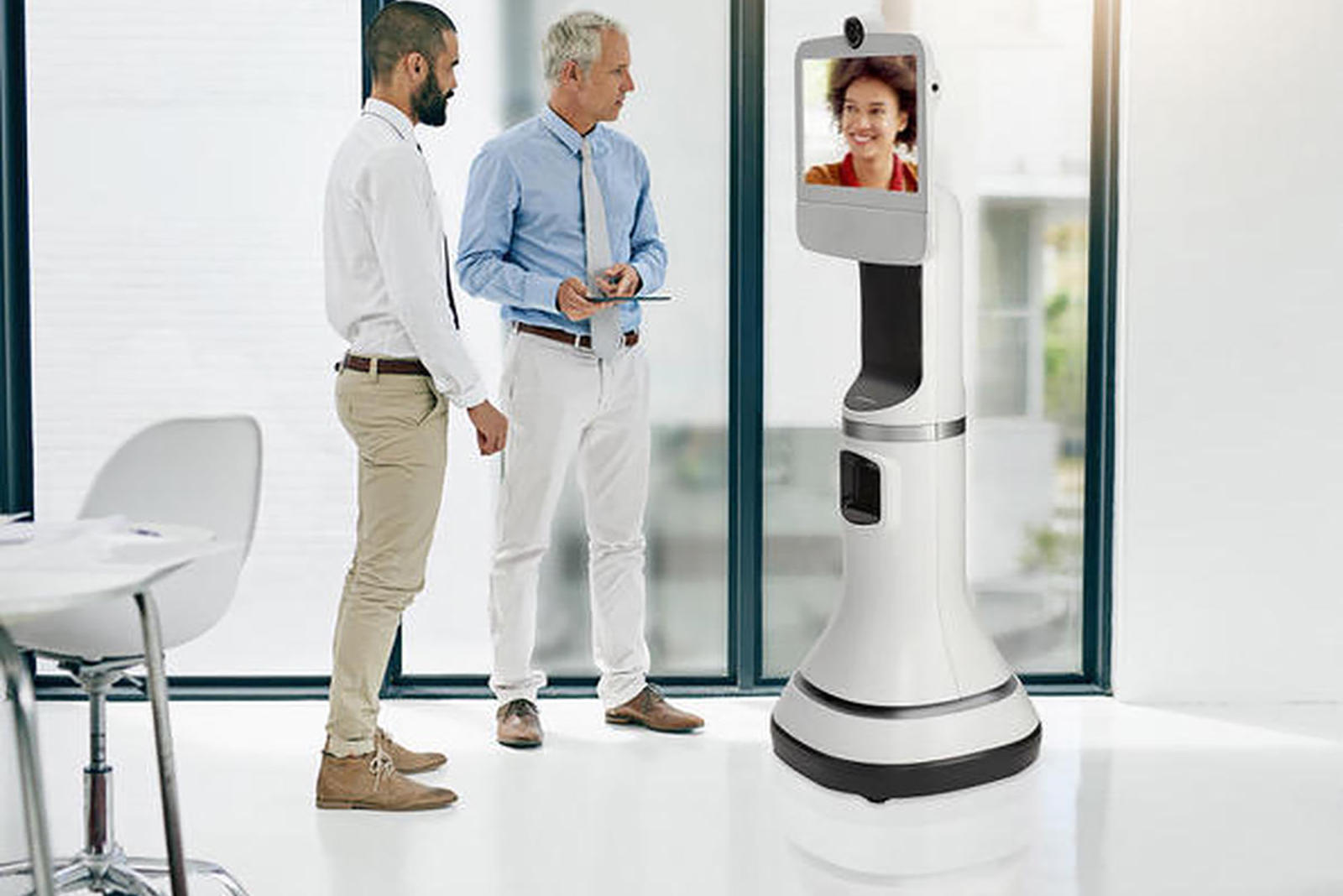 Unlike lower-priced models, the robot features intelligent, autonomous navigation. Remote users simply specify a destination, and Ava automatically moves to the desired location while avoiding obstacles. The technology is slick: The robot utilizes advanced mapping to learn the local environment and create a realistic map of the area, which enables it to navigate at the push of a button. Obstacle avoidance we're used to seeing on autonomous mobile robots in fields like logistics and fulfillment enables Ava to navigate around people and avoid tumbles down the stairs.

Perhaps Ava's biggest selling point is its form factor. This is one sleek unit, making it ideal for applications in client-facing offices and sectors like hospitality. 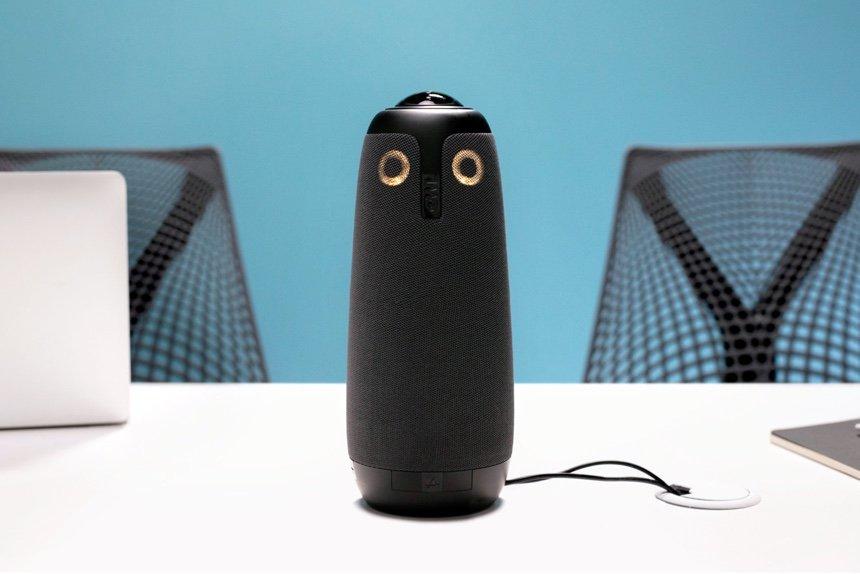 Meeting Owl is a 360-degree video and audio conferencing system that automatically focuses on the people speaking in the room. It doesn't move, so it's not a robot by most definitions, but its autonomous functionality makes it an excellent and highly affordable tabletop system for individuals and teams that routinely conference and collaborate remotely.

Eleven-inches tall, Meeting Owl uses an eight microphone array to pick up sound and lock in on the person speaking. Remote viewers on the other end get a panoramic view of all the meeting attendants and a close-up view of the current speaker.

The system comes in original and Pro versions. The Pro version improves on the Meeting Owl's 720p picture and increases audio pickup range from 12 feet to 18 feet, which is especially useful for larger teams or any collaboration utilizing a whiteboard.

The system integrates with all the major video conferencing services so usability is a snap. The Pro version goes for $999. 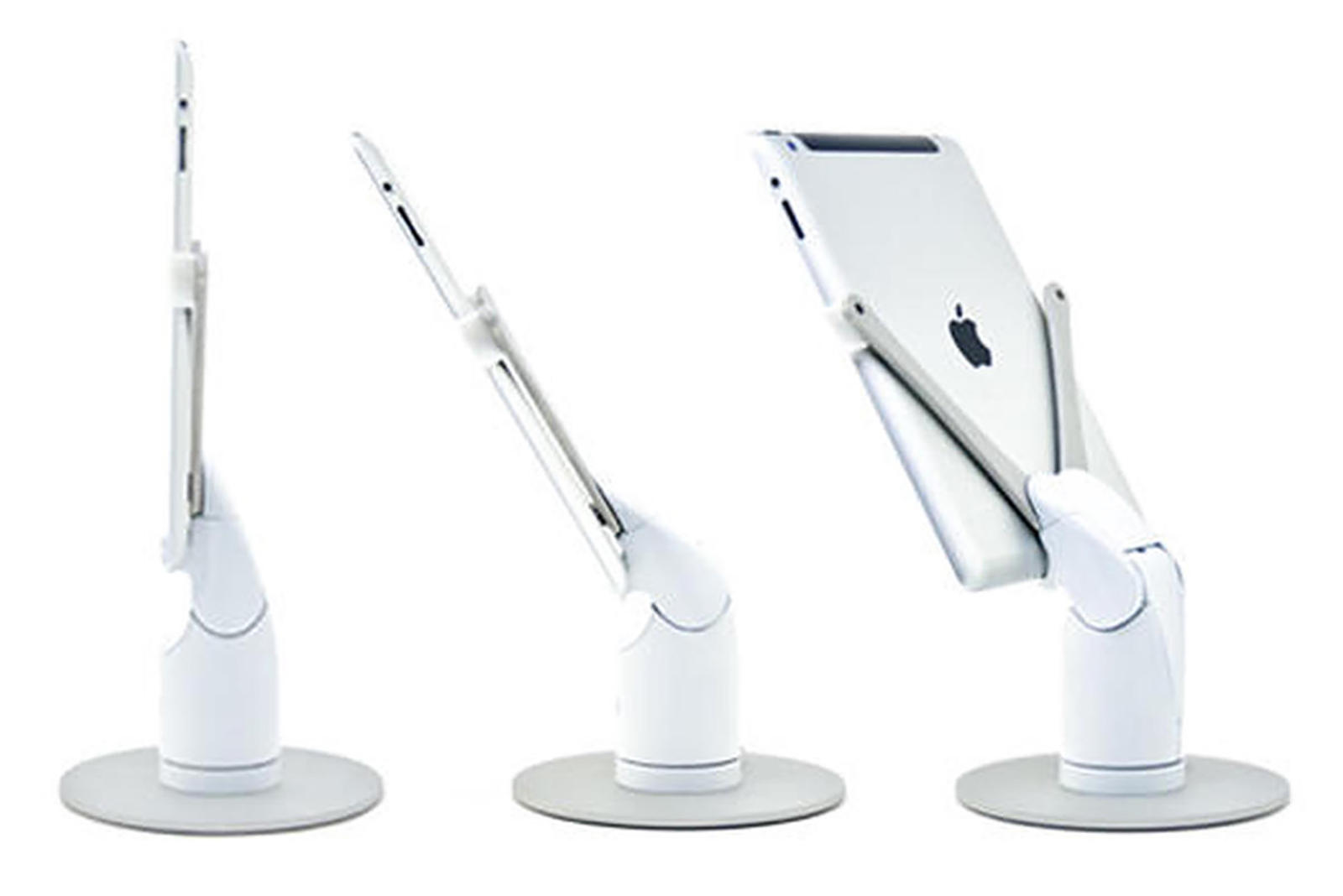 Kubi is an inexpensive ($600) robotic docking cradle for tablets that augments the teleconferencing experience you're used to with the addition of movement.

During video conferencing, the remote participant can steer the cradle to look around a room. "Kubi" means "neck" in Japanese.

That makes it a particularly useful device for team environments where one participant is remote. The remote worker sits at a laptop or desktop but is able to look around the room to engage with speakers, which the device's developers say enhances the interactive experience.

An enhanced audio kit and a secure docking retrofit to keep tablets secured to the base make them good options for educational environments where learners have to beam into larger classroom settings and engage in conversations but won't necessarily have to move around the classroom. 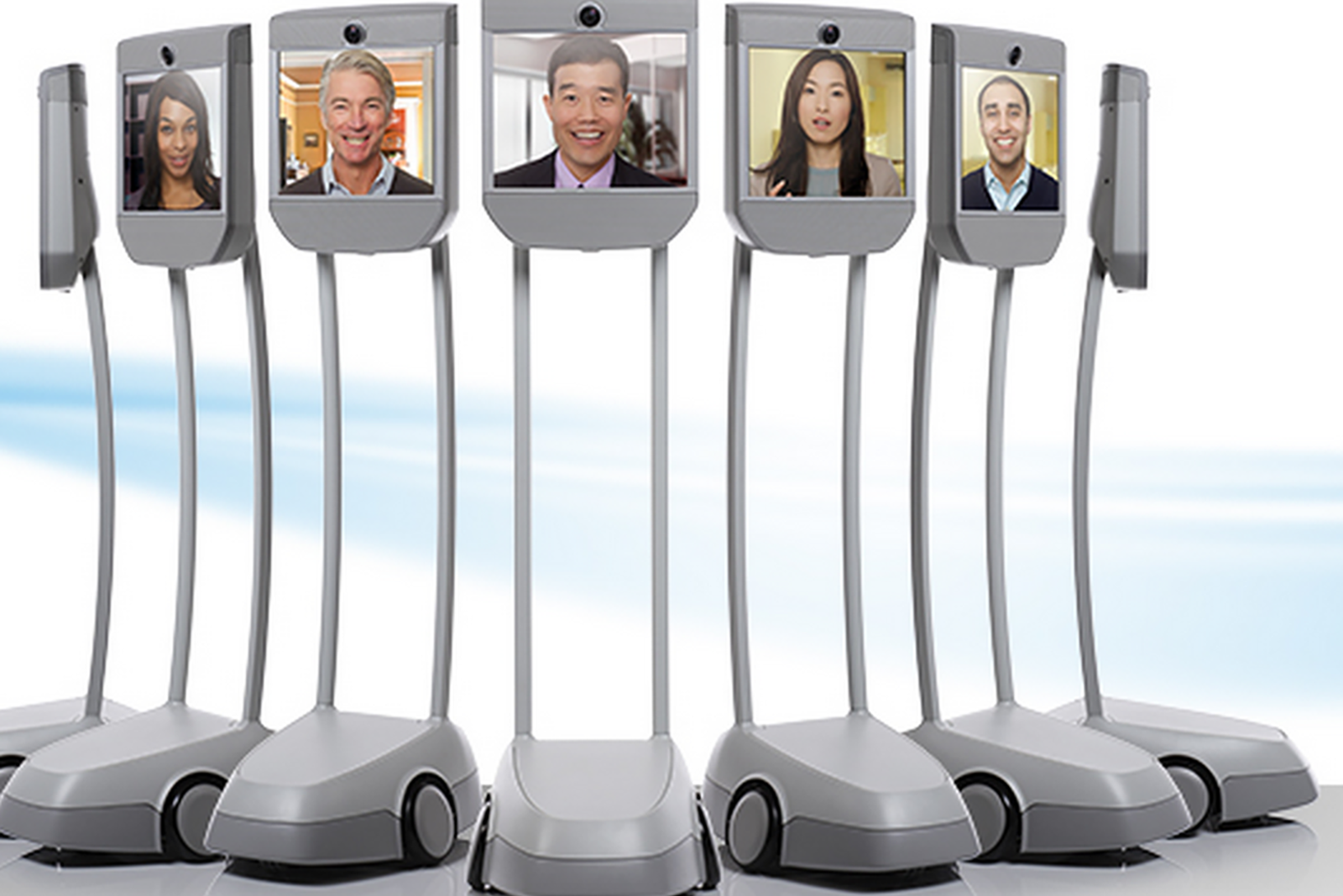 Anyone in tech or a tech-adjacent industry will be familiar with the sight of telepresence robots roving around conference room floors as virtual attendants beam in remotely.

Beam is comfortable in offices and is used by some of the biggest companies in the world, but this robot from Suitable Technologies really shines in conference settings, where it's nimble enough to bounce from keynotes to breakouts to hallway banter.

Beam has four wheels (the pro version has five for increased stability and maneuverability) and wide-angle navigation cameras. The entire ecosystem was built in-house, which means participants must use Beam's app.

The advantage is security, which is best in class. Using industry-standard technology such as TLS/SSL, AES-256, and HMAC-SHA1, Beam encrypts all communication that travels through our system to ensure your calls remain private and secure. 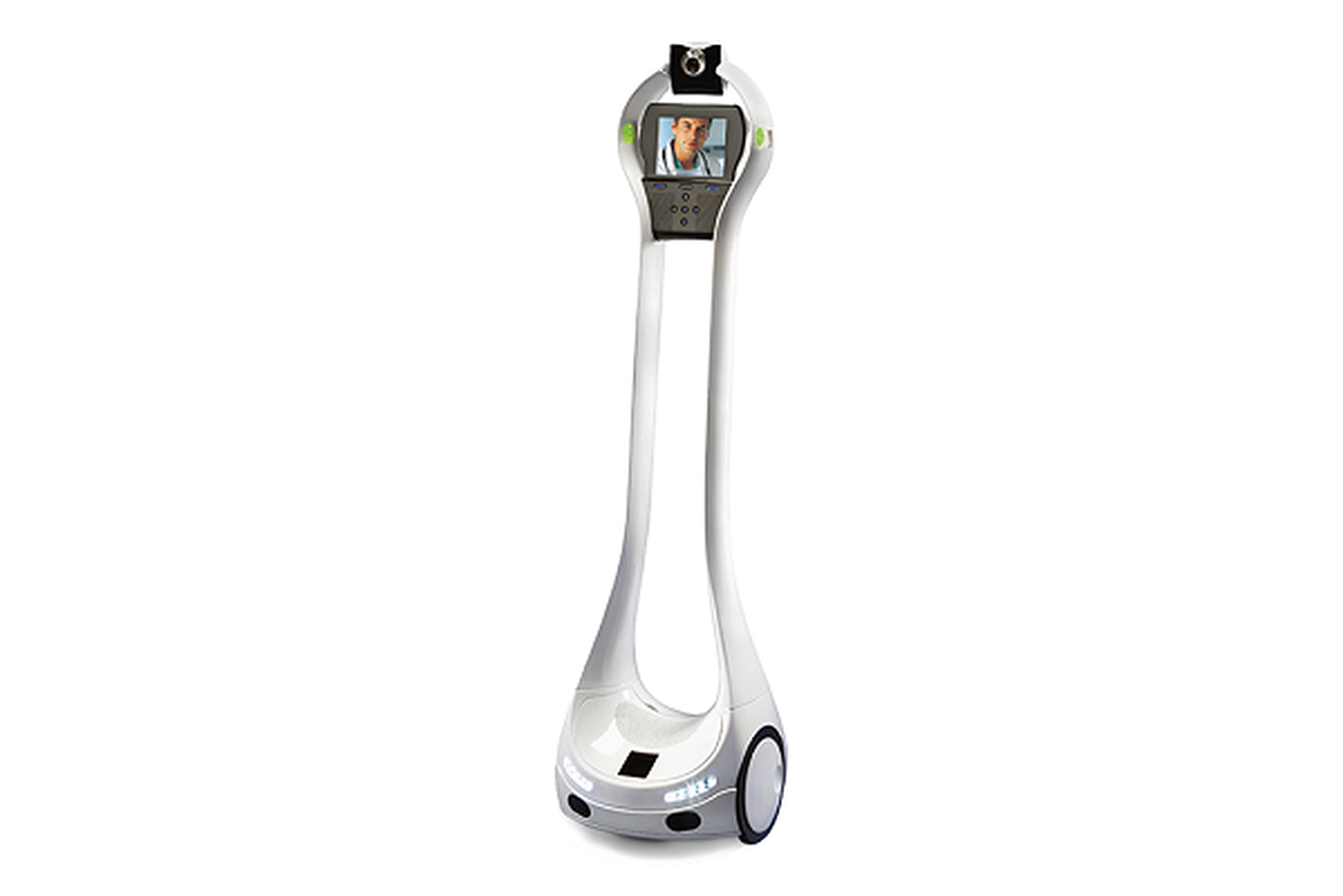 VGo's parent, Vecna, knows the healthcare sector, so it makes sense that the company has developed a telepresence robot that enables healthcare providers to deliver lower-cost services and improved quality of care virtually.

Telemedicine is certainly having a moment as providers figure out ways of reducing in-person visits, but the robot has also been used to enable homebound students to go to school virtually.

Using the VGo application on a PC or Mac, an internet-connected person located anywhere connects to a VGo in a distant facility. VGo can be shared by a set of people or dedicated to a single person using standard web accounts and permission settings maintained by the admin.

VGo is lightweight, contributing to its excellent battery life, which is best in class at 12 hours. That makes it ideal for clinical environments and hospitals.

Offices are coming around to telepresence solutions for remote workers, and the recent health crisis has put the transition to distributed workforces into hyperdrive. Teachers and school administrators are now also embracing remote learning, which, in the short term, can quell infection rates -- but, in the longterm, may be a way to maximize limited resources while bringing needed services to students.

Markets and Markets estimated the overall telepresence market will be over $300 million by 2023. However, that market research doesn't take into account the rapid adoption of remote work due to COVID-19 or the expected long-term effects of the global stay-at-home experiment on attitudes toward remote working. Pivoting out of the pandemic, many companies may embrace a partially distributed workforce, which is a huge opportunity for developers of telepresence and video conferencing systems.

For workers, employers, and IT pros who wish to advocate for telepresence systems, the most important strategy is to tout the collaborative benefits of the technology and to have a plan for implementation. Robots in the workforce carry a longstanding stigma. Coupled with lingering resistance to remote work situations, existing biases on the part of employers or employees could stop the proposed adoption of telepresence dead in its tracks.

But advocating for telepresence as a way of maximizing collaboration and approximating the productive magic that happens in unstructured interactions in hallways and face-to-face chats can help mitigate concerns. As can explaining that most telepresence systems are ready-to-go out of the box with intuitive user interfaces. The technology is carefully designed not to need extensive training to use. After all, most humans don't need training to have natural interactions in person.

What to look for in evaluating telepresence robots

The biggest questions to ask are who might use a telepresence solution and in what settings. If you're just looking to enhance video conferencing without spending big bucks or implementing new processes and protocols, solutions like Meeting Owl or Kubi would be the best places to start.

However, for those willing to embrace the dynamic features offered by a mobile robot, consider whether your environment is client-facing. A slick robot like Ava makes a great impression, although it comes at a price.

For most SMBs, models from Double or Ohmni are likely to be smart bets. They're relatively inexpensive and provide a seamless user interface. A company can get by with one shared robot to start and easily scale up to meet needs.

After all, once one remote employee gets a robot doppelgänger, it's likely others will want them as well.

Other options to consider

The goal of telepresence is to seamlessly integrate remote workers into physical locations. But, in 2021, with work totally transformed and record numbers of workers staying remote for the foreseeable future, that use case may have less urgency for office workers. (The use case for telepresence designed for medical professionals, however, has never been clearer.)

If all of your colleagues are remote, as well, there's not much call for a robot that can roam the halls. If you're stuck at home and suffering from epic levels of Zoom fatigue, I've had excellent luck with Facebook Portal, which integrates video conferencing with all the functionality of an Alexa-powered home assistant. It's not technically a robot, but it does bridge the gap between the standard webcam and the fancier telepresence robots on this list. For the time being, and at least until more workers migrate back to offices, this is a very solution for seamless video conferences from home.