Full Bio
Posted in Between the Lines on April 10, 2014 | Topic: BlackBerry

NEW YORK — BlackBerry chief executive John Chen laughed off the comments made by Reuters in a press room filled with journalists, despite his stern tone in his Thursday blog post.

He said these things take time, and was looking ahead to the future. "We're committed to [the handset business] and we're going to make it work," Chen said confidently.

BlackBerry remains a devices and services company, he said, with the two business units running independently but crucially together to create a whole end-to-end solution, he says.

That's key for the enterprise customer, he says, which remains the company's top priority. And he's going to win them back with better devices, stronger business and security solutions, and by listening to what its core faithful have to say.

Chen confirmed that the majority of its futures phones will have keyboards, but many will be just touchscreen. This was just one strand of a widely unknown and still shrouded push to "win back" the enterprise customer, which remains at the top of the company's priority list. 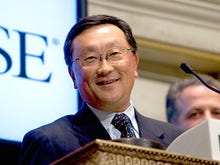 A Reuters story on Wednesday claimed BlackBerry's chief executive would ditch its handset business amid falling sales. In a follow-up blog post, he countered the claims.

"We're going to build high-end phones, and concentrate on the enterprise," he said. But he noted that it's not just about selling millions of units. "That of course helps, but it's a combination of things," notably supporting its enterprise customers, selling servers, and supporting business customers.

He also said that BlackBerry doesn't want to announce a product six months ahead while it's still shipping its current product. "We figured that if we don't do that, the industry doesn't know what our plan is. All they see is a decline."

"It's a calculated risk that we're taking," he said. "So far from the customer response, the risk is well taken."

John Sims, BlackBerry's enterprise chief, confirmed after the PlayBook tablet flop, there are no specific plans for a tablet. Chen likes the plan for a tablet, Sims said, but declined to comment further.

Join Discussion for: BlackBerry CEO admits it 'needs to win the...