Full Bio
Posted in Between the Lines on December 2, 2013 | Topic: Smartphones

BlackBerry's new chief executive John Chen's favorite way to communicate with its customers, it seems, is through the form of open letters .

In the latest round of public acknowledgements, Chen bottom lined the company's position in two quotes. 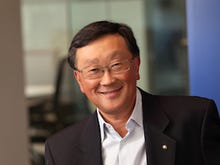 BlackBerry interim CEO: It's time to reclaim our success, not dwelling on the past

The company's interim chief executive admits change is "going to take time," he hinted that he wouldn't have taken the job had he not seen value in the BlackBerry brand.

"Our 'for sale' sign has been taken down and we are here to stay," he said in a note published Monday, adding: "In short, reports of our death are greatly exaggerated."

The big news is that BlackBerry is no longer up for sale, which gives Chen and the newly-formed executive team space to breathe. The smartphone maker recently entered an agreement to receive a $1 billion "strategic investment" which the company said it represents a "vote of confidence" in its future.

The other major tidbit was the announcement of a new company direction, which for those out of the loop, is striking, considering the company stagnated under former chief executive Thorsten Heins. The former boss thought there was essentially nothing wrong with the post-Mike Lazaridis and Jim Balsillie world, who themselves left the company in a mess.

Making a pitch to the enterprise, BlackBerry's bread and butter, Chen said the firm was "going back to our heritage and roots." He added: "As we refocus back to our roots, BlackBerry will target four areas: handsets, EMM solutions, cross-platform messaging, and embedded systems."

Chen noted: "And, just as important, we will continue to invest in enterprise and security related R&D during our restructuring period."

BlackBerry has long been known as the secure smartphone maker. But in efforts to readjust its focus towards a purer form of enterprise customer, the firm is trumpeting and championing is unique mobile device management (MDM) technology.

After all, only BlackBerry's mobile end-to-end technology is trusted by governments and major businesses. That said, Apple's iOS and iPhone ecosystem is catching up and making waves for the Canadian smartphone maker.

Chen said he will offer more in the coming weeks. For now, he said he is "confident" in the company's future and its ability to adapt to changing market needs.

Join Discussion for: BlackBerry CEO: 'Reports of our death are...