For a brief time on Tuesday, details of a yet-to-be announced BlackBerry DTEK60 were published and visible on BlackBerry's website.

The page, first discovered by BlackBerry news site CrackBerry, has since been taken down.

Thanks to the mixup, we now know the BlackBerry DTEK50 will be followed by the DTEK60. According to screenshots captured by CrackBerry, the site reveals the DTEK60 will have a larger screen, faster processor, and gain a fingerprint sensor -- a first for any of BlackBerry's Android-powered smartphones, including the more expensive BlackBerry Priv. 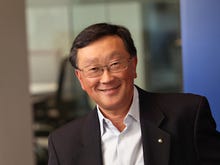 BlackBerry CEO admits it 'needs to win the enterprise back' to survive The company's chief executive revealed in New York City his plans to win back the enterprise customer base in with high-end phones and services. But there are no plans for a tablet.

A BlackBerry spokesperson provided the following statement to ZDNet: "We are not making any product announcements today, but will keep you informed of future updates. We appreciate the interest for BlackBerry solutions and products."

Combine the company's rather vague statement, which breaks from the traditional response of "we do not comment on rumors or speculation", with the fact the information was taken directly from BlackBerry's website, and the DTEK60 seems to be all but confirmed.

Unfortunately, it appears the DTEK60 is built off of yet another reference design from one of BlackBerry's manufacturing partners. As a cost saving move, instead of designing all smartphones within the company, BlackBerry is turning to its manufacturers to design and develop a device, then apply the company's software and security features for it to sell.

The DTEK50, for example, is nearly identical to the Alcatel IDOL 4 smartphone, save for a different back cover and other subtle changes. Side by side, the devices look the same.

Both CrackBerry and Android Police have sleuthed around enough to figure out the design of the DTEK60 will resemble the TCL 950.

For a complete rundown of the DTEK60's specifications, head over to CrackBerry to browse through several screenshots of the page before it was pulled.