Full Bio
Posted in Between the Lines on November 13, 2013 | Topic: Smartphones

John Chen has a lot of work to do if BlackBerry is going to turn around for the long term.

In an open letter posted on the company's blog, BlackBerry's interim chief executive hinted that he would not have taken the role at the beleaguered smartphone maker had he not seen value in the company's brand. 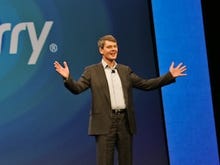 The beleaguered phone maker is waving goodbye to its chief executive and senior directors as the company's bid to find a buyer fails.

Calling for the need for "significant change" as the company "accelerate[s] our efforts to transform our business," Chen firmly noted that the company is "not dwelling on the past."

The key takeaway from the letter is that, reading between the lines, BlackBerry under Heins stagnated following on from the departure of company founders Mike Lazaridis and Jim Balsillie, who themselves left the company in a mess. While Heins saw the release of BlackBerry 10, seen as the company's turnaround effort, much of the business strategy remained the same as he kept his head firmly wedged in the sand.

"There is nothing wrong with the company as it exists right now," Heins said in July 2012, according to Canadian radio. And now look at where the company is, just over a year later.

Still, Chen doesn't want to look at what was or could have been, but what's ahead and how the company will get there.

"We have begun moving the company to embrace a multi-platform, BYOD world by adopting a new mobility management platform and a new device strategy," he said. "We are also leveraging our tremendous assets, including BBM, our network and QNX. While we are proud of these accomplishments, we know there is more work to be done."

Noting that the company has "financial strength for the long haul," BlackBerry's latest fiscal second quarter nevertheless took a blow. During the three-month period ending August 31, the company saw close to $1 billion in losses as a result of poor sales by the flagship BlackBerry Z10 . The company also burned through about $500 million of its cash reserves.

But Chen is positive. He said it will take "time, discipline and tough decisions" to reclaim BlackBerry's success, "and we are ready for that challenge," he said.

Join Discussion for: BlackBerry interim CEO: It's time to reclaim...