BlackBerry - the company formerly known as RIM - has announced the availability of the first BlackBerry 10 handset in the UK. 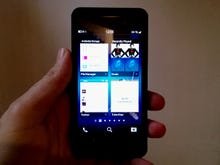 From Thursday, the BlackBerry Z10 will be available from operators EE, Vodafone, and Three; as well as resellers Carphone Warehouse and Phones4U.

EE will be making the Z10 available on its consumer 4G plans, including at £49.99 on a £41 per month, 24-month contract. The tariff includes 1GB of data, and unlimited UK calls and texts.

O2 will be selling the Z10 on its On and On tariff for £36 a month on a 24-month contract, although the deal is only available until 13 February.

Three will be carrying the device from mid-February, but hasn't disclosed pricing just yet.

Carphone Warehouse will be stocking the Z10 from Thursday, on "all major networks", with no upfront cost on a £36 per month tariff.

The all-touch Z10 was officially announced on Wednesday. ZDNet's first review of the device can be found here .

Join Discussion for: BlackBerry Z10 on sale in the UK: Where can...