The UK's largest telecoms provider, BT, says it is starting to see the rewards from its sustained investment in the UK's fibre infrastructure.

The company has reported its results for the fourth quarter of 2014 and the full year, the headline figures including a four percent rise in the number of consumer customers, the first full-year rise in 10 years. Earnings for the whole group were flat at £6.1bn when compared to 2013 following heavy investment in Premier League football, but earnings in its Global Services unit were up by 12 percent. 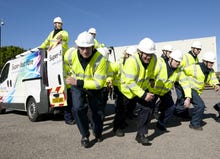 If your broadband is dead, BT may have stolen your line

BT engineers have been accused of pilfering lines and leaving customers in the lurch in order to set up new connections. It happens all the time, according to some.

BT made it clear in its earnings statement that it believes that its strategy of investing more than £3bn to roll-out of a fibre network has been vindicated. As of the end of its fourth quarter (31 March), BT said that more than 19 million homes across the UK now have access to fibre broadband.

This year according to the company BT has added 826,000 new customers for its broadband services (copper or fibre) through its Openreach service. Some 217,000 of these were added in the fourth quarter. BT says that it now had some 18.4m users in the UK.

In contrast, again according to BT's figures, Sky signed up 70,000 new customers in the fourth quarter while EE signed 20,000.

According to BT, this year, around 1.3m new customers signed up to a fibre service from Openreach, with 347,000 of these joining in the fourth quarter, January and March 2014. BT says that this is up around 28 percent on the 270,000 added during Q4 last year.

Gartner analyst Katja Ruud said there is a very positive outlook for BT. "After some of the issues the company has had it is a relief to see that the revenue is quite flat."

Faster growth, when it comes, will come from the consumer market, she thinks. "BT is in a very competitive business, one of the most competitive to be in," she said.

Ruud said that when that is taken into context, it is doing well in the competition with US giants like Verizon and AT&T.