Full Bio
Posted in Between the Lines on January 30, 2014 | Topic: Mobility 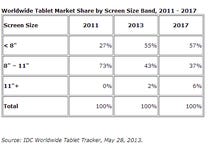 Tablet market to be dominated by small screens, says IDC IDC's growth projection is based on inexpensive Android devices with screen sizes of about 7 inches driving demand.

For quite awhile now, there has been no question about which operating system dominates the smartphone market, domestic or worldwide.

Android's reach is not slowing down either, based on a new report from global market research firm Canalys.

Starting at the top, analysts estimated that approximately 998 million smartphones shipped in 2013.

But Windows Mobile is coming on the strongest, poised to be the biggest disruptor in 2014.

Highlighting Nokia's role, Canalys analyst Jingwen Wang suggested in the report that Microsoft's momentum could have continued if it weren't for "market uncertainty and caution" at the end of the year.

With Lumia accounting for such a dominant portion of Windows Phone shipments, the growth of the OS faltered too. It will be vital that on completion of the acquisition, integration takes place quickly and thoughtfully. Microsoft has much to do if it is to continue carving out a growing share of the smart phone market, not least driving the platform down to new entry-level price points, delivering innovation and new features, particularly at the high-end, and proactively working with, supporting and encouraging developers to commit to building compelling apps, and bring its app story closer to parity with its competitors. It cannot afford lengthy delays or distractions, and the combined Windows Phone devices team needs to hit the ground running.

But it's the sheer rapid rate of growth during the fourth quarter that is really striking with 69 percent growth year-over-year.

In comparison by those same metrics, Android grew by 54 percent while iOS only grew by seven percent annually in Q4.

Apple's platform grew shipments slightly from 2012 to 2013, but it might not be as much as expected given the launch of two brand new smartphone models in the second half of the year. Shipments grew to roughly 154 million. But iOS's market share dropped from 20 to 15 percent.

Join Discussion for: Canalys: 80 percent of all smartphones shipped...