OWC's fast Mac storage takes SSDs out of the MacBook and into shared systems.

Other World Computing (OWC) is best known for swap-out SSDs using fast Toshiba flash memory that speed up Macs, with unusually long seven-year guarantees. The new Aura Envoy USB 3 aluminium enclosure that comes with its MacBook Air SSD replacement is a thin sloping wedge that lines up nicely with the Air case, so you can reuse the disk you replace as a stylish external drive. Apple doesn't yet have a machine with USB 3 ports, but they're expected in Ivy Bridge-based systems.

The Aura Pro replacement modules OWC offers for the Air now go up to 480GB and they're the faster 6Gpbs SATA connection that the latest Airs support (even though Apple is still supplying slower 3Gbps storage itself). The 480GB module will be available at the end of the month, for $1,149.

Now the company is branching out into more powerful storage systems, still with a Mac flavour.

Particularly interesting is its Jupiter mini-SAS hub. SAS (Serial Attached SCSI) is the enterprise equivalent of SATA and a single mini-SAS connection gives you speeds of up to 24Gbps. That's fast data sharing that's not much more complex than direct-attached drives — you don't need the infrastructure of a storage area network or the high cost of fibre channel to get large amounts of fast, shared storage. OWC's CEO Larry O'Connor estimates that mini-SAS is a quarter of the price of fibre channel and three times faster (24Gbps rather than 8Gbps) and it's flexible too.

You can fill a Jupiter with SAS or SATA drives, configured a RAID 0, 1, 5, 6, 10, 50, 60 — or 'just a bunch of disks' (JBOD), which would work well for Windows 8 Server's new Storage Spaces. You can start with a tower containing 4TB — around $5,000 with the associated PCIe cards and cables for four workstations — and scale all the way up to 3.6PB by connecting more Jupiter systems together.

The mini-SAS connector can plug in to a mini-SAS PCI Express card in a Mac Pro or PC server, or you can attach it via the 9-port hub to share the storage between 8 workstations or connect multiple Jupiter systems with an LSI switch. Connect 8 workstations through a 9-port hub and each of them gets 24Gbps bandwidth; connect two channels with two cables and you can get 48Gbps. The management software lets you zone specific drives to specific servers or workstations, or pool the storage for general use. 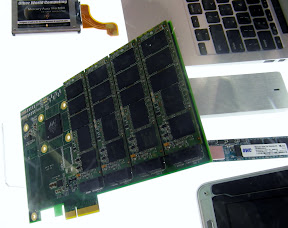 This PCI Express card has software RAID that works with Macs

If you want to max out a single computer with fast storage, OWC's planned PCI-Express card has embedded RAID using the Marvell 88SE9445 SATA 6Gbps RAID controller for its four 480GB flash drives (although options go from 60GB to 2TB on the card and you don't have to fill all the mPCIe slots so you can start small and expand). O'Connor showed us the prototype card and claimed that this is the first PCI Express SSD for Macs. Use that with RAID 0 for pooling the drives and you get sustained throughput of 2Gbps — which means you can do video editing of the largest files without interruptions. Because it's software RAID you won’t be able to boot from the card, so OWC is planning a bootable 8-bay hardware RAID model later this year, which will still deliver around 1Gbps.