It appears that AT&T is hitting the accelerator when it comes to connected cars.

Out of a total 1.2 million wireless net additions in the first quarter for the U.S. carrier, 684,000 of them were vehicles. That works out to 62 percent of the carrier's total net adds for the quarter, showing that you can still grow your mobile broadband business in the face of smartphone saturation. It also illustrates where the future growth will come from.

Such growth will turn AT&T's connected car business into a billion dollar revenue stream this year, estimates analyst Chetan Sharma, in his quarterly review of the U.S. mobile market. 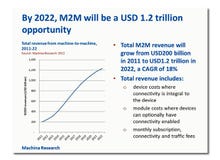 Sharma notes that if you include M2M, or machine-to-machine, connections for AT&T, the two business lines are already hitting a billion dollar a year revenue run rate. And for overall market, this is the first time that non-phone subscriber additions where higher than phone adds.

Look too quickly at the overall net additions by device type and you might miss the fact that the market is transitioning.

Tablets have taken the lead over smartphones for now, as the slates tallied 41 percent of the total new mobile subscriptions for all U.S. carriers in the first quarter of this year. Phones accounted for just under half that of tablets, says Sharma, being 20 percent of the net additions in the January to March time frame.

So where is the rest of the growth coming from?

M2M and cars, which accounted for 24 and 15 percent of net additions, respectively.

That first figure is telling: There were more new M2M connected devices added to networks than phones. And the connected car shows no signs of slowing down, either.