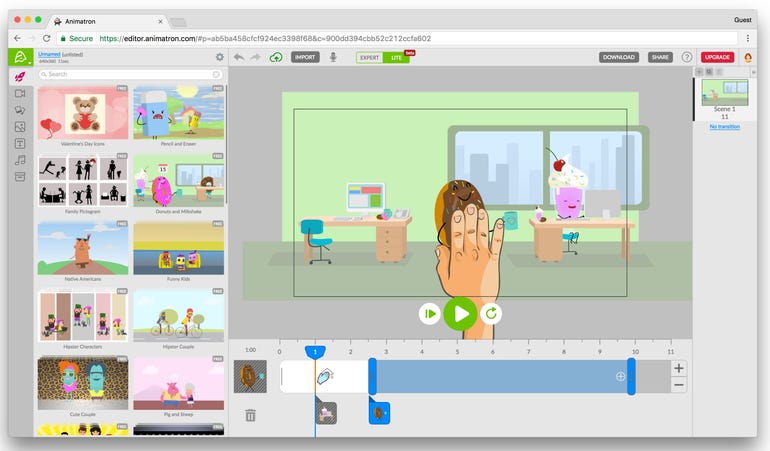 In past weeks I've shared deals on things like PixelModo, Lumen5 and Depositphotos -- tools and services that can help small businesses produce high-quality visuals.

Here's another amazing one to add to that list. For a limited time, StackSocial is offering a lifetime Animatron Studio Pro subscription for just $49.99. If you were to subscribe normally, it would run you $90 for just one year.

A few important notes before I delve into the service itself: StackSocial doesn't offer refunds on digital redemptions like this one, so consider test-driving Animatron's freebie mode before making a commitment.

Also, although this is a lifetime license, you'll have to ping Animatron after five years to get your subscription extended. (Translation: Set a calendar reminder for 2023.)

Animatron Studio helps you create animated videos -- the kind that have proven far more effective for sales, marketing, tutorials and the like than static text or graphics. At first blush it might strike you as similar to the aforementioned Lumen5, but this is actually quite a bit more versatile: You can leverage a variety of tools and images to build actual animations, not just slideshows with moving text.

To that end, Antimatron gives you thousands of animated characters, backgrounds and props -- but also lets you import your own media: audio, photos, videos and so on.

The end results can be shared and saved, of course; it even supports real-time collaboration with team members.

Now, there's definitely a bit more of a learning curve here than with the likes of PixelModo and Lumen5, and a bit more work involved to create an animation. That's to be expected, simply because there are more moving parts (literally). But in the end you can achieve something a production house might have charged you thousands of dollars to create.

That's the beauty of tools like this; it lets little guys look like big guys, even on little-guy budgets. For a one-time payment of $50, what's not to like? (No, seriously, I'm asking -- what am I missing? Because this strikes me as pretty awesome.)