Dell was the best selling company in the Brazilian PC market in the first quarter of 2015, according to analyst firm IDC.

With 15.8 percent of all PCs sold in the country within the first three months of the year, this is the first time the company leads that segment since it entered the Brazilian market 15 years ago.

The IDC research released by Dell itself does not disclose the market share of the competitors, but market leaders include Chinese manufacturer Lenovo and Brazilian company Positivo, which recently reported a drop in sales in the first quarter.

According to the computer giant, the market leadership is due to factors such as including PCs as part of the company's end-to-end corporate IT offering and expanding its reseller network in Brazil. 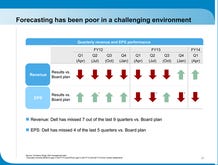 "Retailers played a fundamental role in achieving this historic leadership. In 2014, we increased the number of retailers selling Dell desktops and notebooks by fivefold, and we are also present in the largest [Brazilian] e-commerce portals," says Dell Brasil president Luis Gonçalves.

The news of Dell's PC sales boost comes as the segment in Brazil faces a downward trend that has been going on for the last couple of years, caused mainly by the rising US dollar against the Brazilian real and the consumer shift towards smartphones.

Another IDC paper reports that some 1.964 million PCs were sold in the first three months of the year in Brazil, so 20 percent less than in the same quarter in 2014.