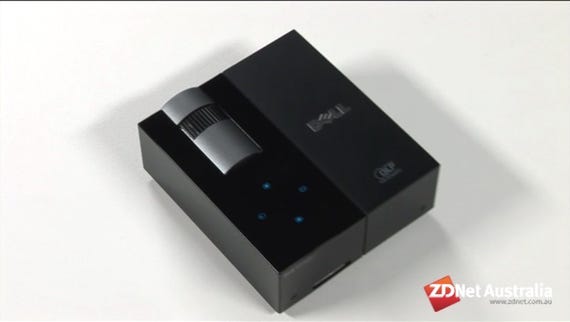 There is much to both love and hate about Dell's M109S projector. It has a very low resolution, gets seriously hot, and is only 50 lumens in brightness. At the same time it's tiny, has the longest lamp life we have ever seen, and is mercury free.

Design
Oh look! It's tiny! It seems the age of the massive projector is over, and small is the new black.

Which bring us to Dell's M109S projector, which is black, small enough to fit in the palm of your hand, and only 360g in weight. It's also piano black, meaning it will accumulate fingerprints given ever the slightest touch.

Unfortunately, the significant amount of cabling you have to haul around with this projector reduces its portability. There is both a power brick and a power cable, but fortunately, a standard Dell laptop power cable seems to fit the projector, so if you're willing to run the risk of running your laptop off batteries, you could potentially carry one power cable.

There is also a three way splitter cable, which plugs into the only port on the back of the projector, and gives you access to power, along with the two data inputs for this device, VGA and composite video.

There aren't a lot of buttons and ports on this diminutive projector. Across the top is a set of buttons for keystone correction, switching video input and other functions. There are a couple of warning lights, and a wheel for lens focus.

Other than that's there isn't a lot to say about the design of M109S, other than to ask the obvious question — can a projector this size really perform well?

Features and performance
The short answer seems to be no. Unfortunately, the M109S comes in at a small resolution of 860 x 600, meaning even netbooks won't be able to display in their native resolution on this projector.

This projector is also by no means noisy, but it is certainly audible once plugged in. It also gets very hot. After only twenty minutes of use it was uncomfortable to hold.

It's quite cool that Dell managed to cram vertical auto-keystone correction into this tiny unit. The M109S uses a DLP projection system.

The maximum display size for the M109S is 60 inches, however at this size the 860x600 resolution really doesn't look great. Imagine a large screen TV at lower resolution than a netbook. It looks much better, and clearer, at its smallest 15-inch display size.

One very interesting feature of the M109S is that the lamp is LED-based, meaning it last much longer than the standard mercury affair (and less toxic; mercury can form nasty derivatives like dimethyl mercury — a fraction of a drop will kill you).

The LED-based lamp on the M109S clocks in a massive 10,000 hours of life — roughly four times the standard projector lamp life. It also can't be replaced, so to calculate lamp life we just divided the overall price by the lamp life, giving a cost of 8 cents an hour, a fantastic result.

Verdict
Travellers may find Dell's tiny M109S projector a boon, but we just wish Dell had made it even a little bit brighter. This tiny machine also has the lowest specifications we have even seen on a projector by a mile.

Before you buy one, keep in mind that at a resolution of 800x600, you will probably only be able to see two-thirds of a standard webpage, and you won't be able to project any form of high resolution video. You should be able to watch standard DVDs (with composite at 720x480 NTSC or 720x576 PAL), but make sure you turn the lights off.

The M109S costs $800, which makes it comparative in price when compared to Dell's larger portable projectors. Like seemingly all tiny technology, you pay a premium. Had the M109S been cheaper, something of a netbook of projectors, we would have liked it a lot more.

At first we weren't sure if we hated or loved the M109S, but its super long lamp life and lower running cost pushed in into the later category. If this is the future of projectors, we look forward to it.