By Zack Whittaker for Between the Lines | December 19, 2013 | Topic: Networking

Dish is reportedly eyeing T-Mobile US as a potential acquisition target for 2014, reports Reuters, which spoke to sources familiar with the matter. 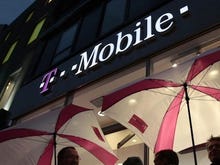 T-Mobile CFO floats Sprint merger boat: 'Not if, but when'

T-Mobile's CFO suggests the two together could carve out a "more competitive environment" for the U.S. cellular market. But after the failed AT&T-T-Mobile merger in 2011, would the U.S. government allow it?

If that's the case, Dish could be face-to-face with Sprint in a bidding war, which has reportedly also looked at making a punt for the cellular giant  — the same company it briefly and ultimately unsuccessfully tried to buy earlier this year.

But now Dish, not content with not owning a cellular firm of its own, may want to take a stab at T-Mobile instead.

Dish chairman Charlie Ergen is reportedly looking to expand the company he founded beyond television, and wants to plow new resources into the cellular market. It wouldn't be such a bad idea considering Dish has amassed billions of dollars worth of spectrum over the past few years.