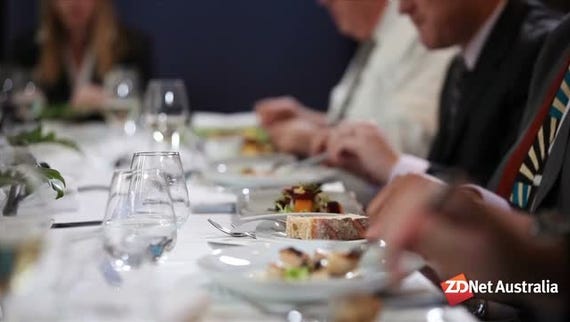 While some companies have taken to social media like ducks to water, others are frightened to even dip their toes in. ZDNet Australia held a roundtable this month with IT executives from top Australian companies to gauge how social they are and how social they'd like to be.

Three of the companies that participated in the roundtable — Citigroup, BCR Australia and the Australian Taxation Office (ATO) don't condone social media use by their employees at all. Tower Australia allows its employees 20 minutes over lunch for "socialising".

Two of the top reasons for restrictions on social media use involved employers being worried about employees wasting time or saying things online they shouldn't be saying.

"The Tax Office is very aware of reputation risk and we're very conscious that we have our staff doing the right thing," ATO senior technology architect Ross Smith said, talking not only about keeping sensitive information about citizens safe, but also about not wasting taxpayer money on the salaries of people who spend time on social sites.

Global financial giant Citigroup, on the other hand, has been held back by its size, with policy needing to be formulated on a global scale.

"We've got a strategy where we want to use this channel, but we also want to encourage our staff to use it responsibly," Citigroup head of digital banking, Michael Weeding, said.

"[The ban is] not something an organisation like ours would want to see go on for a longer time," he said, pointing out that everyone was using social media anyway via their smartphones.

Animal Logic director of technical operations, Xavier Desdoigts, said that this risk needed to be acknowledged, but put into context.

"I think we need to be ready for the occasion where someone does the wrong thing, because, especially like a bank, a bank gets burgled sometimes. If we [apply] the same type of attitude, there wouldn't be any branches for the bank, because sometimes there's a hold-up," he said.

"So it becomes a risk management issue. Of course, the banks need to be open and yes they're going to be attacked from time to time. But, overall, there's a cost benefit, which is really in favour of banks having branches open.

"How we react to that is as important as the event itself. Sometimes we need to get over the hurdle of acceptance to see, well, it's not great, but it's not the end of the world."

And it's been done before. Lucas Group acting CIO, Terry Frankish, pointed out that IT departments have gone through the same dance with email.

"It wasn't instantly that everybody had access to that," he said. Instead, a form needed to be filled out with a description as to why a user required email access. "It was certainly conservative."

Weeding reminisced about the shenanigans that occurred when email first made its way into the corporate world.

"Don't you remember when everyone first got onto email, how irresponsibly everyone used it?" he asked, reminding roundtable participants of the funny, but wildly inappropriate clips that were often sent around.

And it wasn't just email that had caused the controversy, according to Desdoigts, who recalled when the conversation was about web access, or having a telephone on a company desk.

"People are going to make [personal] phone calls on company time," he remembered people as saying at the time.

ATO's Smith said that it would seem to make sense to allow staff to use social media, but monitor their use, saying that all company policies basically consisted of three points, where the final point was always "if it doesn't work, go back and change point one and point two".

Those companies that decide the risk is too high might be missing out on more than they know.

"Email's efficient," said Carl Jones, Open Text director of Engagement Solutions for APAC. "But posting something on what appears to be a wall or a feed is a lot more efficient way."

And those looking to justify social media could play that card, according to Frankish, who said that reduction in the amount of time employees spend on email would be "a real statement".

However, he did worry that social media may end up only adding to the management burden if we continue to use email and then also spend time watching social media feeds.

A lot of larger organisations are looking at making their intranet a social tool, according to Jones.

Citigroup doesn't use a social product internally per se, but does make use of internal blogs for employees to share information.

"I follow it internally. You find it really interesting. You find things going on in the organisation you had no idea existed. It could be someone selling cupcakes for the RSPCA day on Monday," Weeding said.

And younger employees are used to communicating using social media — many consider email to be a service "for old people".

"Are your teenagers in front of their email everyday? No, they're not," Desdoigts said. "That's a truth I have to swallow, because I do a lot of email and consequently I'm an old person."

If he wants his teenagers to check their email, he sends them a Twitter or a Facebook message.

"There's a whole generation that's coming, that's the way they function," he said. "They're going to bring a change, a revolution. I don't know exactly what it is, but it's not going to be the same."

Weeding said that staff who consider social media to be essential to their jobs are likely to be from an organisation that is more likey to be innovative.

"I think organisations that are quite innovative have got these channels and are using them quite well," he said.

"If your organisation doesn't do it, you're not going to attract the right people who create innovation. That's what every senior manager needs to consider."

Of course, there's also the risk of alienating older workers if the conversation becomes completely social.

"I quite often refuse to look at my email, sometimes for days," ATO's Smith said.

"So I'm prepared to bet pounds for peanuts that if Twitter or Facebook suddenly became the avenue of choice, I would ignore that too."

Finding the meaning amongst the crowd

When embarking on the use of social media to engage with customers, it was important to first find out what people are saying about your company, according to Weeding, which is why his company started its social media push with a listening phase.

"There are lots more conversations going on than you actually think," he said. "I find it so revealing, I wish I could utilise it more.

"The information is so rich, so powerful, so unbelievable."

For organisations where the executives have customer sentiment as a key performance indicator, watching social media is a great measure, he said.

The bank uses tools to measure sentiment and keep track of conversation, one of which is Brandtology.

"I've got daily alerts coming in when conversations are going on," he said.

He said that if someone sat him down without the tool and asked what conversations were going on, he wouldn't answer the same as he would with the tool.

Without such tools, it can also be easy to miss conversations.

"A concern I've got, is there are so many forums, how would you know?" Frankish said.

Even after companies find out what people are saying, the question remains as to how they should engage with them.

Desdoigts said that AnimalLogic is cautious of responding to commentators.

"There are people that are pretty nasty out there," he said. "Sometimes presence may be the start of an issue."

"We have a recent policy that when there are things negative written about the company, we actually don't say anything. The best thing to do is say nothing, because 90 per cent of the people will see what it is as a rant or someone who's had a bad experience. The best thing you can do is leave it alone."

He was also concerned about companies misusing the medium.

"Social media is not for companies and people," he said. "They're expecting social media being an interaction between people ... Any sort of company involvement outside of listening is seen very quickly for what it is — a commercial interaction.

Weeding said that Citigroup responds to those who seek it out, but won't enter into a conversation uninvited.

"Only one in 10 people will complain. So there's another nine or 10 who aren't complaining," he said. "If I see one issue on the channel, my team has to think, hit it straight away, fix that problem.

Rocla Industries head of IT/BDM, Mike Lukban, said that it can be tricky, however, to know what to say, referencing posts that his company had made on a professional forum.

"It's a debate in the open," he said. "Sometimes it's the quality of the writing of our people that will either make us look good or bad. And that's a bit risky for us."

It wasn't a casual conversation to him.

"When it's out there in the internet, the words need to be chosen carefully," he said. "We're still using it, though we're very careful now."

"It's not about going out there and selling in your traditional marketing way," he said, pointing to his company's dining program as an example. Customers who go to certain restaurants and pay with their Citigroup credit card get a free bottle of wine with their dinner.

Customers would post on social media about this experience, he said.

"Great brands will let consumers tell their own story," he said. "That's how we've been approaching it and ask our marketers to approach it.

"If your customers are telling their own story, it's going to be a lot more powerful."