Europe's Aviation Safety Agency has removed another obstacle to passengers using smartphones and tablets during flights.

After giving the green light to smartphone use during flight last year , Europe's Aviation Safety Agency (EASA) now says it's fine to use smart devices without activating flight mode.

Following last year's guidance update from EASA, British Airways, Scandinavian Airlines, and other carriers began letting passengers use their devices during take-off and landing, so long as the passenger had switched on flight mode.

Photos from the flight 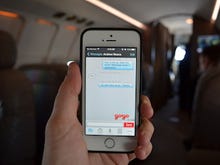 Airlines that did permit devices often remind passengers to turn on flight mode, but rarely if ever check or enforce the flight mode requirement. So with the new guidance from EASA, they can simply skip the process altogether.

According to EASA, the new guidance is meant to bring aircraft device use in line with other travel options, such as trains, and is a regulatory step towards gate-to-gate telecommunications.

"EASA has been working towards enabling airlines to allow the use of these devices with freedom comparable to that in other modes of transport, for example in trains," it said.

"This has been achieved: from the 26 September 2014, EASA has made it possible for airlines to allow passengers to use their PEDs throughout the flight, regardless of whether the device is transmitting or not, ie in 'aeroplane mode' or not."

Last year, after EASA said it was safe to use mobile devices in flight mode, the European Union cleared the use of 3G and 4G spectrum by airlines to provide broadband services to passengers at altitudes higher than 3000 metres.

Earlier this year, German airline Lufthansa began offering mobile services on its long-haul flights. Through a deal with Aeromobile, Lufthansa passengers could use their own networks for data during a flight, including services from Vodafone, EE, and Three in the UK; T-Mobile, Vodafone, e-Plus and O2 in Germany; and AT&T and Verizon in the US.

Lufthansa did however include one rule that had nothing to with EASA — the airline banned voice calls during flight and reminded passengers to put their mobile on silent or vibrate.