The first question asked by refugees arriving in Lesbos is: "What country am I in?" The second is usually: "Where can I get Wi-Fi?"

That's been the experience of Evert Bopp, founder and CEO of Disaster Tech Lab (DTL), an Irish charity dedicated to deploying communication networks in disaster-hit areas.

DTL's current mission is building and maintaining a free Wi-Fi network on the Greek island of Lesbos, a main access point into Europe for refugees fleeing war-torn areas in the Middle East.

Over the past five years, an estimated 250,000 Syrians have lost their lives and 11 million have been forced from their homes, causing an unprecedented refugee crisis in Europe.

About 20,000 refugees and migrants are waiting on the Greek islands. Lesbos, just 10km from Turkey, receives nearly half of all refugees. Some 39 percent come from Syria, 24 percent from Afghanistan, 25 percent Iraq, and three percent from Iran, Morocco, and Pakistan.

Having managed to leave countries, if the refugees survive being smuggled by boat and arrive on Lesbos's beaches, the first thing they need is a Wi-Fi connection so they can find help and shelter.

​As more refugees reach Germany, here's how its tech community has responded

With asylum seekers struggling to settle into life in Germany, the country's IT community has tried to create technological solutions to help them.

These moments, where humanitarian aid and technology combine, are vital to the refugees. Having set up the entire Wi-Fi network from scratch, DTL also worked with Mercy Corps and the International Rescue Committee on a refugee-specific web portal to ensure that as soon the refugees connect they are redirected to RefugeeInfo.eu.

"This tells them where the refugee camps are, where can they can get medical aid and where they need to register as an asylum seeker," Bopp explains.

"All that has been localized in the relevant languages, and we make sure that's the first information the refugees see when they connect."

Usually working in natural disaster zones, from Hurricane Sandy to Liberia's Ebola crisis, the situation on Lesbos is the first man-made disaster, European crisis that DTL has been involved with.

"It's on the periphery of the continent we live on, so it has a certain political edge," says Bopp. "After the Paris attacks we received comments like, 'Why are we helping these terrorists coming into Europe', things we haven't experienced before."

Bopp says the demographic of the victims also places a greater demand on the services DTL is providing.

"From a technical aspect, these are not poor downtrodden refugees with no money," he says. "They are generally well-to-do and have an extraordinarily high level of smartphones and devices, and they are used to using the internet to access data."

It was in August 2015 that Disaster Tech Lab decided to respond to the growing refugee crisis. Initially, the plan for Lesbos was to set up a few small Wi-Fi zones.

But within a week of arriving, the United Nations High Commissioner for Refugees (UNHCR) asked DTL to provide full Wi-Fi coverage for the island's two refugee camps: Moria and Kara Tepe, both of which shelter around 2,500 people.

"That was quite a challenge as there was no infrastructure. We literally had to start digging holes to put lampposts in and put the equipment on, and then find a solar power solution to power the equipment," Bopp says.

"Because only one of the camps had actual internet connectivity nearby, we had to build point-to-point links to the other camp via relay on the water tower, so there was a lot of configuration, IP addressing and firewalling, and so on. We also needed to make sure that if there was a power outage, then the equipment would start up again by itself and retain its configurations."

Bopp was an IT professional working in the wireless field before he left the corporate world to set up DTL in 2010, so he understands the technology and the hardware very well. But because much of the work DTL does is unconventional, he admits that the equipment and high level of support from US-based Cambium Networks is invaluable. 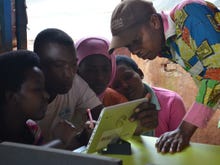 A French project to bring mobile libraries and connectivity to people in the aftermath of crises has been given a vote of confidence in a recent 'tech for good' list.

Cambium Networks started working with DTL in 2013 in the wake of the Typhoon Haiyan tragedy in the Philippines.

"They provide all our equipment and provide guidance. We're really working together almost like system integrators," Bopp says. "We get continuous feedback, information about how equipment performs in the field, and they are there 24/7 on call to help us."

With full Wi-Fi coverage required for both refugee camps, which comprises three networks, one for the refugees, a password-protected network for the NGOs and police, and one for DTL's own personnel, the initial planning took about three days.

However, the unconventional nature of the project and lack of infrastructure meant the whole implementation took a little longer, even though the very first access point was up and running within a week DTL's arrival.

"The actual install of the Cambium gear took a week or so. Currently, there are four point-to-point links, one point-to-multipoint with four subscriber modules and nine hotspots," Pérez says.

"The project also has two VDSL connections provided by Vodafone, securing 30M/30M and 50M/50M download/upload, and the point-to-point links. Unfortunately, it was a start-stop process as we worked out all the issues."

Equipment is kept secure by mounting the subscriber modules and hotspots on standalone masts or on buildings about 12ft to 16ft high, and the point-to-point gear is located at telecoms provider tower locations and on a water tower.

The team has also installed refugee housing units containing desks, laptops, and tablets and charging points that the refugees can walk in and use.

More recently the team was asked to provide connectivity in a new area 50km north where more refugees are arriving. To solve that problem, DTL worked with the local university, which provided access to a 500Mbps backhaul. The new location will be connected over the mountains by two PTP 650 wireless links.

The success of the overall project makes it a model that could work on other Greek islands or other places where refugees need internet connectivity. However, to expand its reach, DTL needs help.

"We need qualified people, volunteers in wireless networking who can apply their knowledge to help us on deployment," says Bopp.

"We also need equipment for the refugee housing units, such as printers and devices, as the equipment we've put in place has a very high wear-and-tear rate.

"The only thing that limits us is our funding and resources, otherwise we're free to help wherever we are needed."