Evernote is in the "very early" stages of working on an enterprise-grade offering.

The online clipboard service already has a business pedigree: two-thirds of its consumer user base also use Evernote for work, and in December last year , it launched Evernote Business, a version of the service aimed at SMEs.

Now, Evernote is looking at expanding to far larger companies with thousands of users, according to John McGeachie, VP of Evernote Business sales: "We're very early in the design and scoping phase of what can we build, what makes sense and how would we package that up and roll it out to people," he told ZDNet.

While there's no timeline on the product, it's hoped it could be launched in the near-term. "Near is a relative term but we'd like it to be as soon as possible, as would our customers. It's absolutely something we're actively planning and working on because we get lots of requests," McGeachie said.

Among the features Evernote is likely to add to its future enterprise offering is auditing and user management features including easy onboarding for new users and permission-setting.

The company is now working with some larger companies to help learn what it needs to do to build out the existing version to make it appeal to enterprises.

"We consider ourselves to be small or medium range. Evernote is approaching 300 people - we're confident we can make a great product for companies that size, but we're less certain about how to build that for 1,000 or 5,000 person companies. 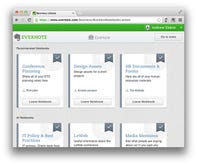 "There are some things that we need to do that we want to do to make it effective for larger companies. What we're recommending when we talk to larger companies is to start with a department or a work group and understand what Evernote Business can do, how it feel productive and how they can build some process around that, and we want the feedback so we can evolve the product along with them."

In the meantime, Evernote is extending its enterprise reach by taking Evernote Business into new countries: last month, the service became available in 26 new European countries as well as Australia and New Zealand. Evernote has also said it planned to extend availability to 50 more countries in EMEA, Latin America and Asia before the middle of this year and has already started on that target by launching the service in Israel, Russia, South Africa, Hong Kong, Taiwan, South Korea, Turkey and Singapore.

Its planned product line and geographic expansion has been set against many companies' worst nightmare: earlier this month, the service suffered a hack - in which the intruders gained access to user information, including usernames, email addresses, and encrypted passwords – spurring it to reset all user passwords.