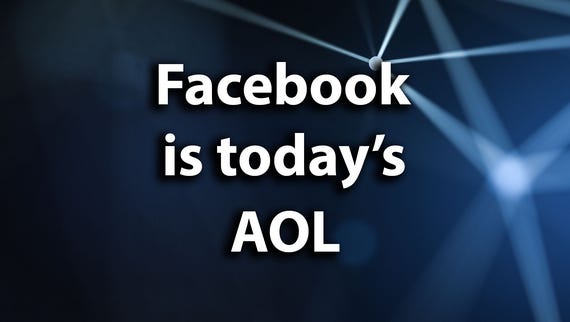 Once upon a time, roughly thirty years ago, there was a computer network called America Online. 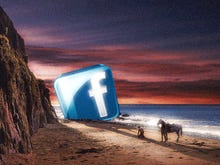 AOL, as it was typically referred to, sent out little diskettes in the mail, and sometimes slipped them into the middle of popular magazines. The diskettes were a way for people to go online. There was already an Internet, but most people didn't know how to use it or even that it existed.

AOL, and a couple of competitors, Compuserve and Prodigy, offered people online things they could do, such as chat with other people. Mostly, the services helped people to get around the difficult aspects of what are known as Internet protocols. Internet computers need to communicate via connections that require a dedicated communications line, and a so-called IP address, which in turn requires a software program called TCP/IP. Most people's computers didn't have any of that.

Instead, the little diskette in the magazine let a person plug their computer into their telephone modem — once they'd bought a modem at the local computer store — and dial up a server computer that would admit them to the world of AOL or, alternatively, to the world of Compuserve or Prodigy. Some people grumbled at how many diskettes were stuck inside magazines, but the diskettes were an effective way to attract new people to sign up and use the service.

Many people spent days and days at a time on AOL and the other services. The services had only one drawback, which was that they were limited. People couldn't do just whatever they wanted, they could only pick from a small menu of functions, such as chat, that the services provided. And the services didn't grow or change much, they stayed pretty much the same for years because it wasn't in their interest to change when the diskettes kept bringing people in.

Most people didn't mind that the services were limited and didn't change. People were just excited to be in a place called Cyberspace. Suddenly, they could send a message to someone in a different town, even a different country, even people that they had never met. People could also adopt a secret identity, such as "picklefinger0237," and the anonymity made interacting even more exciting.

Right about the same time as AOL, a smart person named Tim Berners-Lee, who worked at a prestigious research organization, published some software people could use to connect from their computer to any computer that also had the software. It was the World Wide Web. The software quickly caught the attention of many people and it blew their minds. With a real Internet connection, a person could reach any computer in the world. People saw that they didn't have to accept the small menu of functions that AOL offered them.

Moreover, the excitement that people felt when they were sending a message to a person in another town now swelled until it became a fervor to see the world. People had a sense the small little place in Cyberspace where they had dwelt was nothing compared to a vast universe just over the garden wall. The excitement pushed even ordinary people to find out how to sign up with a thing called an "Internet Service Provider." It required people to understand something called "point to point protocol," which was almost like learning science, but still less annoying than all the diskettes.

As it grew and grew, the World Wide Web became an amazing place in contrast to AOL. People found they could visit articles and whole magazines written by people they'd never met, even from around the world. And there was a constant stream of innovation, with lots of software appearing all the time that made "surfing" the Web amazing.

People even discovered more of the Internet, such as things like "file transfer protocol," where they could get lots of stuff no one had ever seen in the form of files. Programs such as "finger" let a person see who had been online, which, again, blew people's minds.

People were so excited by the World Wide Web, they never wanted to go back to AOL or Compuserve or Prodigy. The three services withered. Mostly, people who were older held onto their AOL accounts because they still had an email address linked to AOL and it was a little confusing to try to get a new email address. But over time, with help from the younger generation, even those people were able to shift to using new email services and enjoy the Web.

Soon after people became excited about the Web, business people started to say it was sad that AOL and Compuserve and Prodigy had withered away because they had been a great way to make money for a time.

The business people decided that there should be a way to make something like AOL, even though everyone thought Web sites were amazing and didn't want to go back. A content company called CNET (a sister site of ZDNet)  invented a service called Snap Online. They put out T-shirts telling people it was like having AOL but so much better. They wrote the word Snap with an exclamation point — Snap! — so that it was even more exciting.

Other people tried to make another AOL, including a group of the smartest venture capitalists in the world, who spent nearly $50 million to create a site that would be more like meeting real people, called Friendster. It had some success at the beginning because people really wanted to meet not just new people but people they knew. Then people cooled on Friendster, and it got sold — for a lot less money than it had taken to build it — to a Malaysian online payments firm. People mostly forgot about Friendster.

None of those failures deterred business people, and they created new services, including a service called MySpace, where people could put up information about their rock bands.

Also: Why is your identity trapped inside a social network?

Finally, some smart people hit on a formula and they created some brand-new places for people to meet.

Business people were even more excited because Facebook started to generate a lot of advertising revenue. Advertisers liked Facebook because it not only knew who was talking to whom, it also knew a little bit about the hobbies and interests of people. Advertisers liked that because they could use the information to "target" their ads like never before.

Smart people said that Facebook had what are known as "network effects." It became more powerful the more people joined it. A scientist deduced the possible reason. It was because Facebook had what's called a "scale free" network that solved the problem of how to meet up. Most people didn't know that many people, but everyone knew one or two people who knew a whole lot of people. Those one or two people were the hubs in a social "graph" that allowed even lonely people to meet lots more people, in the same way everyone in Hollywood knew someone who had worked with the famous actor Kevin Bacon on a movie.

As more lonely people met new people — and old friends — via Facebook, Facebook grew and grew. Its revenue swelled from $153 million dollars a year to $2 billion to $18 billion until one day it was making almost $120 billion dollars a year selling advertisements as people did stuff together. Facebook became one of the most powerful entities in the world, worth over a trillion dollars, because it had so many people doing stuff, almost two billion people.

There were just a couple problems with Facebook. Facebook was a lot like AOL. It limited people by telling them with whom they could communicate. And unlike AOL and Compuserve and Prodigy, people couldn't just be any fun identity they wanted, like picklefinger0237. They had to present themselves as themselves because advertisers liked to know who was talking to whom.

Many people didn't really mind that they were limited in whom they could talk to. They liked to "build their brand," they said, by showing off pictures of themselves and talking a lot about themselves. Also, people felt it was fine because just like with AOL, they had a couple other options, including Pinterest and Twitter and LinkedIn and Instagram, and even a new thing called Snap, without the exclamation point. Those were like having Compuserve and Prodigy back in the day.

But a few people got concerned. They noticed that not only did Facebook and services like it limit who could talk, and to whom those people could talk. The concerned people noticed that the services manipulated how people talked to one another, with computer algorithms called "data voodoo dolls." Even business people became alarmed. They said Facebook had "zucked" people by betraying people's trust.

Also: Physics explains why there is no information on social media

One of the bad things was that people no longer had control. They had given so much information about themselves to Facebook and its competitors that it was like those companies owned people when they were in Cyberspace.

The services didn't seem to do a great job of handling people's information, either. Even though they wouldn't let people talk to just anyone they wanted, Facebook and the other services went and sold people's information to people they didn't know in far-away countries. And everywhere a person would go on the Internet, Facebook and its competitors would let advertisers keep following them, keeping track of them, which people had never counted on when they joined up.

Concerned thinkers said the new online services were watching everyone's behavior and shaping it and invading their privacy. The consequences became worse and worse. People had thought they were relating to one another, but they were really screaming at one another like in a school lunchroom food fight.

The reason they were screaming was because the data voodoo dolls and the other algorithmic tools weren't really bringing people together, they were encouraging repetitive patterns of behavior, like getting people mad by constantly displaying the most inflammatory things people said about anything and everything. It was all for the purpose of sorting people's behavior into convenient buckets as a way to communicate a clear buying signal to help advertisers.

Even the people who were excited about building their brands had some misgivings. They suspected at times that their identities were not real. They were now simply a figment of an advertising database that constructed an identity for them in order to keep people coming to Facebook and other services. It was almost as if people didn't exist anymore when they were in Cyberspace.

Then one day, someone smart built a new technology that didn't require people to sign away their information. Now, people could meet anyone they wanted and talk about whatever they wanted, not just what Facebook or its competitors said was okay. People felt more relaxed, too, because even though there were ads, people could meet up in Cyberspace without every single action they took being used to fuel an advertising machine.

People got excited again, like the first time they found the Web and gave up on AOL.

But there our story ends, because that chapter has not yet been written.

Join Discussion for: Why Facebook is the AOL of 2021