Facebook announced on Wednesday that it has switched on its first European datacenter.

Located in the Arctic circle, the Luleå, Sweden-based datacenter will now handle site traffic from users around the world.

The social networking giant, which has more than 1 billion users, chose the site for three reasons: cheap cooling, renewable energy, and a blazingly fast Internet connection. 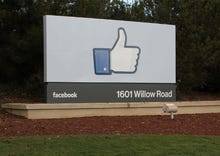 The datacenter will also help the company ease relations between it and the EU, following criticisms by privacy activists in recent years over the company's data practices. A Facebook spokesperson confirmed that this facility will not specifically process European user data.

The company claimed the datacenter is "one of the most efficient and sustainable datacenters on the planet," thanks to its design and an in-flow of renewable energy sources in the region. The facility feeds in hydroelectricity from the local River Lule in the Gulf of Bothnia to power the massive server racks.

And, thanks to the geographical location, cooling costs are far lower because of the cold Finnish air. Any excess heat generated is pumped into the office's heating systems.

Nearly all of the datacenter's technology is based off the company's founded Open Compute Project, which aims to see its partners and providers share its hardware designs. From the servers to the power distribution systems, these systems are part of the company's "vanity-free" hardware designs that reduce the unnecessary need for excess materials, and can be shared with others.

The datacenter scores 1.07 on the power usage effectiveness (PUE) score, which exceeds the ideal PUE of 1.0. Facebook also said it will be adding a real-time monitor so users can keep an eye on its status.