The Federal Bureau of Investigation could not pinpoint a single notable case that was solved using far-reaching surveillance powers under the Patriot Act, findings from a new report say.

In a lengthy 77-page report by the Justice Department's inspector general Michael Horowitz, agents could not recall a single memorable or major case during a two-year period that was cracked using the powers, which have been increasingly used to spy on Americans with no connection to criminality. 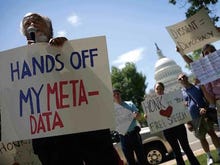 US to stop collecting bulk phone records? Not really: There's a catch

Even if a crucial and controversial legal authority expires later this year, the US government will still be able to collect billions of domestic call records on Americans.

That's in contrast to what agents and attorneys said about the powers, describing it as a "valuable" for investigations.

"The agents we interviewed did not identify any major case developments that resulted from the records obtained in response to Section 215 orders," the report said in its conclusion, "but told us that the authority is valuable when it is the only means to obtain certain information."

Section 215 of the Patriot Act allows the government to secretly demand any "tangible things" from a business on its customers, from credit card and banking records to phone records. The most notable case forced Verizon to continually hand over its entire store of customer data.

In a five-year period ending 2009, the FBI had more than doubled the number of bulk surveillance orders under its belt, despite no evidence suggesting the collection was working.

Provisions in the Patriot Act expire on June 1, but Congress has just a few hours -- at the time of writing -- to pass an extension, or let it sunset.

We reached out to the FBI but did not hear back at the time of writing.

Gallery: For iPhone, iPad privacy, here's how to turn on encryption