France's TV5Monde has been struck by an "unprecedented" attack which knocked out its IT systems and broadcasting equipment.

TV5Monde, which broadcasts to 200 countries, took to Facebook and YouTube to explain that a serious cyberattack, which began on Wednesday, had knocked out its TV channels, websites, and social networks. The Paris-based company's website - which remains down for maintenance today - was also rendered inaccessible. 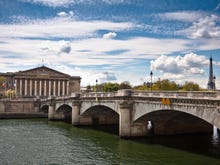 How will new internet surveillance measures affect business in France? A shared digital space requires trust, so why has the French government introduced stricter online surveillance laws and how will it affect enterprises online behaviour?

"We have been the victim of an extremely powerful cyberattack. The attack affected all our 11 channels, nine general and two specialist, which went dark," TV5Monde's managing director Yves Bigot said in a video posted to its Facebook account early this morning. "At the same time, we have lost control of our social networks and our internet sites. Our entire team is working on restoring the programming you're used to."

The attacks began late Wednesday and took down the 11 channels for several hours. Bigot told Agence France-Presse the attacks were "unprecedented for us and unprecedented in the history of television".

"When you work in television... and you find out that your 11 channels are down, of course that's one of the most dreadful things that can happen to you," he told the news agency.

After seizing control of the network's social media accounts, the hackers posted messages in support of terror group ISIS as well as documents purporting to reveal the identities of relatives of French soldiers involved in anti-IS operations, according to the report.

France is providing support for US led airstrikes that have been carried out against ISIS in Iraq and Syria.

An executive from the station told local media that the attack knocked out its entire IT systems, leaving staff unable to access email, which in turn stymied efforts to contact Twitter and Facebook to regain control of their accounts.

France's prime minister called the attacks on TV5Monde an "unacceptable attack on freedom of information and expression" on Twitter.

Earlier this week the FBI issued a warning to Wordpress users over a recent spate of website defacements by ISIS sympathisers. However, unlike the attack on TVMonde, the FBI noted that most of these defacements relied on relatively unsophisticated methods that typically exploited vulnerable Wordpress plugins.