Oliver Wick, who works in BMW's Munich office, has a rather unusual job title: as a "Technology Scout", he is responsible for scanning the weird and wonderful world of emerging technologies, and assessing which ones have the potential to improve the automotive giant's business model. 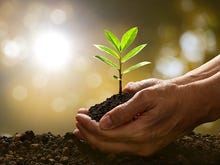 Tech Budgets 2022: A CXO's Guide In this special feature, ZDNet looks at how business leaders are spending their tech dollars, and offers valuable advice on optimizing your budget plans in the wake of the coronavirus pandemic.

His yearly targets? In his own words, "to bring innovation to BMW". And Wick is only one part of a strategy developed by BMW over the years to foster the discovery of new technologies across the business, in an attempt to constantly stay one step ahead of the competition.

The automotive company has 'Technology Offices' spread out across the world, where experts like Wick are tasked with identifying relevant innovations and generating trend reports for use cases ranging from car production to smart city services.

To assist their work, BMW's teams are equipped with a 'Tech Radar' -- custom-built software that collects and analyses data from R&D, patents, markets, venturing and other sources, to provide a full-spectrum view of emerging technologies of interest and of their level of maturity.

Once a promising innovation has been identified, technology scouts are expected to network with startups and universities working in the field and to come up with proof of concepts. Once these have been green-lighted, relevant technologies can be transferred to the central business.

To expand the tech discovery process, BMW has also created a 'Startup Garage' to encourage smaller organisations with a good idea to submit their pitch, with the promise of a contract with the automotive company for those selected.

And even internally, BMW has deployed an accelerator program. "If someone in the purchase department has a great idea that has nothing to do with purchasing, we want to accelerate that," Wick tells ZDNet.

Wick is currently working on incorporating quantum computing into BMW's business model -- a technology identified via the tech radar in 2017 that has piqued the interest of the company's highest-level experts. BMW is now organising a crowdsourcing challenge to invite startups and researchers to submit ideas for quantum algorithms that could eventually solve problems like sensor placement on vehicles or material deformation during production.

"Our objective is to find the hidden companies, organisations or individuals that we wouldn't find with traditional means," says Wick.

BMW is not the only company to invest in the discovery of new technologies. Another example is energy manufacturer Enel, which currently boasts 'Innovation Hubs' in 10 cities across the world, all designed to discover startups and small organisations whose technology could eventually serve Enel's own business interests.

Among the numerous partnerships established by the energy company features Form Energy, for instance, a startup that is developing low-cost and long-duration batteries that can be combined with renewable energy sources. Enel is actively investing in Form Energy and providing the startup with guidance to grow its product.

BMW and Enel are examples of huge companies with deep pockets, which have committed significant budgets to technology discovery. But smaller companies should not rule out investment in innovation.

For Dawson, it doesn't matter how big a company is: every company should set aside a budget for technology discovery. This is because regardless of size, investing in innovation is what could make the difference between a company that stagnates and one that grows.

Budgeting for the near-term and aiming for measurable returns on investment (ROI) remains key. But Dawson argues that organisations should also keep in mind the "far horizon", which comes with higher risks but much better rewards.

"You have to understand and track what's cool, what's emerging, and then see where you can innovate," says Dawson. "The next horizon is higher-risk, but it will really take you to a new business opportunity and enable real growth."

For example, a recent study carried out by the Harvard Business Review analysed data from a multinational oil company to assess whether the firm's efforts in R&D had paid off. After reviewing 7,000 drilling projects, examining the career history for over 30,000 engineers and holding interviews with managers and executives, the researchers found that the company had spent billions of dollars on R&D every year and generated almost 10,000 patents. This led to drilling costs falling by 15%, saving an average $90 million per year per subsidiary.

Yet many companies struggle to see the value of dedicating money to exotic-sounding technologies -- think quantum computing, but also hydroponics or 3D printing, all the way to self-healing materials or smart textiles.

Looking at long-term trends, researchers have found that since the 1980s, US companies have reduced spending on basic, exploratory science and engineering. A more recent survey by KPMG stressed that innovation teams within organisations are still small, with 38% of respondents reporting that their teams were smaller than 10 people.

It's easy to see why companies would hesitate to invest in emerging technologies, when there's no assurance that they will ever see their money's worth in business value. But according to Dawson, mentalities are changing fast -- largely because of the huge transformations that were forced upon businesses in the last months as a result of the COVID-19 pandemic.

The health crisis drove business agility, as organisations scrambled to adapt to new ways of working, and this also translated into budget agility. In other words, companies realised that unlocking money to transform their operations could create huge benefits. Case in point: Dawson noted that Gartner enquiries during the pandemic went up 30% in volume.

Now that companies are in the recovery stage, Dawson is convinced that the gap will widen between businesses that continue investing in innovation and those that decide to go back to their old ways.

"Even though you have to think about recovery and stability, I still think that a lot of innovation is tied to embryonic emerging technology and taking advantage of that. If you don't do that, you're not recovering to the same level," he says.

"You can't play it safe now. You can't just repeat."

So what's next? It's one thing to set aside a budget for innovation, but it takes more than spending to boost the chances of finding a game-changing technology. The Harvard Business Review's researchers found that there is no statistically significant relationship between a firm's investment in basic, exploratory R&D and its stock market value.

The only times where that relationship could be established, said the researchers, was when the business had established a well-defined innovation strategy in addition to investing. Indicators included the presence of teams tasked specifically with innovation and incubation, or the quantity of public communications about innovation made by the business.

Setting up a strategy for discovering emerging technologies might seem like a daunting task, especially for smaller organisations, but a growing number of tools are now being built to help. Mergeflow, for example, is a Germany-based startup that automates the process of hunting for innovation.

"People come to us because they know that there is something somewhere," Florian Wolf, the founder of Mergeflow, tells ZDNet. "It's pretty much all in the web, but you can't collect and analyse all of the data by yourself. It takes too long. You need automation to do that."

Mergeflow's software, which was used by BMW to build the company's tech radar, scans thousands of scientific and technological publications, patents, news, market analyses, investor activities and other data every day. Users can search for a concept or a category and immediately access hundreds of potential innovations that are related to their query.

The company's algorithm also looks at startups and companies working on each specific innovation to find out how mature they are, based on data like venture funding or collaborations with other researchers and inventors. It can also estimate market sizes for a given company or innovation.

According to Wolf, the appetite for Mergeflow's software is growing at pace. Before the COVID-19 pandemic, the company relied on a traditional enterprise sales model that appealed mostly to large firms. But since then, Mergeflow's engineers have developed a low-priced sales service. The number of smaller, less-heard-of organisations that have signed up for a trial has boomed, according to Wolf.

"You can discover things that you otherwise wouldn't have known even existed," says Wolf. "It can really pull you forward or shoot you out of the pool if you miss it.

"The speed of development across technology fields is really high now. It's not just a risk -- it's almost a certainty you will fall behind if you don't do this."

On a seemingly quiet day in the office, Wolf remembers, he tried using Mergeflow to find an innovation in the most unexciting field that he could think of. He ended up typing 'shock absorbers' into the software -- and it wasn't long before he found himself reading about ClearMotion, a startup that's developing a software-controlled motor equipped with sensors that collect data about road conditions.

ClearMotion is developing a platform, which means that it could potentially enable other businesses to innovate on top of its services. "This is a field where nobody would ever expect innovation," says Wolf.

The lesson, Wolf argues, is that if innovation can still happen with shock absorbers, then it's hard to think of a reason why it couldn't transform any other business. It might be time, therefore, to start re-drafting your annual budget.

Join Discussion for: These 'technology scouts' are hunting for...