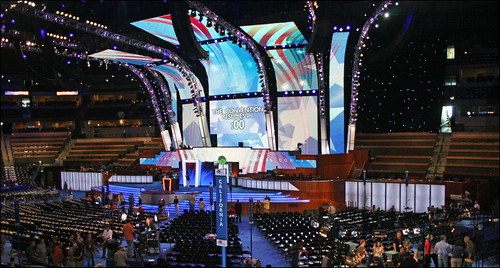 Worried you’ll miss it the second John McCain announces his veep choice? After all, the GOP isn’t offering a text-message alert the way Obama did. (Not that that worked so well.) Well, maybe young mothers won't be checking it at 2:38 a.m., but electrion-crazed on-call geeks just might log on to Google's many avenues for mobile election news.

Google is streamlining news, search, YouTube and RSS feeds for smartphone users, all part of its full-bore attempt to show that it can single-handedly deliver more non-news than 1,500 traditional reporters.

Speaking of which, Jack Shafer at Slate says the media shouldn't bother to attend these coronation festivities. Shafer says short of a brokered convention, there is zero news value to a convention. He would apparently favor Google's approach:

[A] better way to improve convention coverage would be to withdraw all reporters and force the curious to rely on a C-SPAN feed.

On NPR's On the Media, Shafer said news organizations should just send sports reporters, who are skilled at building tension and telling stories about events with virtually no real import.

It's funny because right after the Shafer segment, Brooke Gladstone interviewed Washington Post writer Paul Farhi, who's been reviewing NBC's coverage of the Olympics at the Washington Post's Playback column. Farhi's gripe: NBC has studiously avoided any mention of non-Games news, even as they do puff pieces on the Three Gorges Dam, for example (over 1 million people were forcibly removed from their homes but NBC's backgrounder piece constrained itself to making lame jokes about beavers.)