Google Play has widened its lead on worldwide downloads over Apple's App Store, from 60 percent in 2014 to 100 percent in 2015, according to a new report from mobile analytics firm App Annie.

Despite that growth, Apple retained its lead in terms of money, with revenue growth on iOS marginally outpacing that for Android, leaving the App Store with roughly a 75 percent lead. 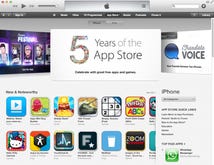 Apple recently boasted that it had paid developers nearly $40bn in revenues earned through the App Store since 2008, and claimed that a third of that money was generated in 2015.

In the US, downloads via Google Play are creeping up, and by the second half of 2015 surpassed App Store downloads. However, in line with global revenue trends, App Store revenues grew faster than Google Play's.

App Annie notes that Google needs to "evolve" its strategy to drive more revenues for developers. But to achieve that goal in any meaningful way, it needs Android to win more share at the higher end of the smartphone market.

In the UK, the App Store still leads Google Play on downloads, but the gap is closing. At the end of 2015, Google Play's share of downloads reached 45 percent, up from 40 percent a year ago.

The top five revenue earning nations on the App Store in 2015 in descending order were: the US, Japan, China, the UK, and Australia. For Google Play, the top five were: Japan, the US, South Korea, Taiwan, and Germany.

Worldwide, Spotify is the top revenue-earner across Google Play and iOS, followed by Line, Pandora, HBO Now, and Tinder. Microsoft's only app in Android's top 10 by monthly active users was Skype, which came in at seventh. Microsoft had none in the top 10 on iOS.

The report also offers a glimpse of how much impact the Apple Watch and Apple TV have had on app development.

As the company has previously reported, there were 14,000 Apple Watch apps at the end of 2015, up from 3,000 since the device's launch in April last year. The most common category of iPhone app with a Watch companion are apps in the weather category, followed by shopping, social networking, and news.

App Annie suggests that for Apple Watch to achieve long-term success, it may need to find apps that don't just repeat the function of the smartphone. For example, these could be apps with vertical-specific use cases, such as monitoring operations of staff or equipment.