Google Ventures, the search giant's VC arm which has recently invested in robotics, Nest, Uber and others, has launched a $100m fund dedicated to startups in Europe.

Google Ventures is launching in Europe to compete for a stake for the continent's growing number of promising startups, which have often found success despite having access to scarcer funding than their counterparts across the Atlantic. 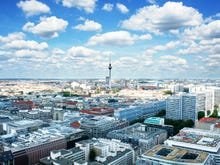 The war of the European tech hubs: Is Berlin really stealing London's thunder? In Europe, venture capital is getting increasingly spread out, with countries like Germany and France challenging the dominance of the UK.

"We believe Europe's startup scene has enormous potential. We've seen compelling new companies emerge from places like London, Paris, Berlin, the Nordic region and beyond — SoundCloud, Spotify, Supercell and many others."

The move follows rumours earlier this week the company was brewing plans for a European fund, and eyeing local investors and other talent to support investments on the continent.

Maris didn't name the individuals that the company has brought onboard for its European venture, however according to the Financial Times, the new unit will have have five general partners, including Eze Vidra, who headed up the Google Campus in London's Tech City.

Also joining will be Tom Hulme, a well-known investor; Peter Read, a British angel investor and advisor to tech companies; Avid Larisadeh, co-founder of online fashion retailer startup, Boticca, and head of the UK's code.org. Tech blogger MG Siegler, who joined Google Ventures as a US general partner, is also with the fund in a temporary capacity.

According to Siegler, he will remain general partner in the US but will be "heading over to support the new team for a time".

Google Ventures' $100m fund is significant for the continent's startups but it's not on the scale of the some of the European funds raised by VC firms recently, such as Index Ventures' newly launched $550 early stage fund, Accel's $475m fund, and Balderton Capital's $305m series A venture fund.

Google Ventures already has a portfolio of 250 companies that it's invested in across consumer, mobile, commerce, enterprise and life science. Besides smart thermostat startup Nest, which Google snapped up earlier this year , some of its notable investments include Uber, Cloudera, and Flatiron Health.