Full Bio
Posted in Between the Lines on October 29, 2018 | Topic: Artificial Intelligence 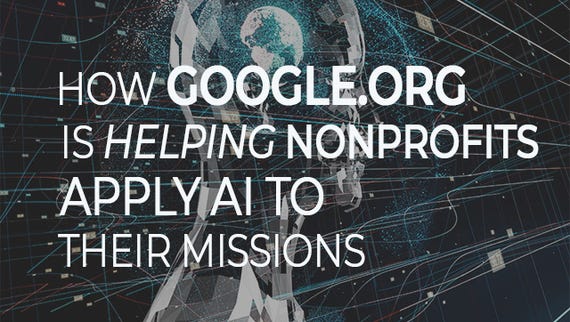 How Google.org is helping nonprofits apply AI to their missions
Watch Now

Google on Monday unveiled a new initiative, called AI for Social Good, that aims to steer the company's vast resources and expertise in artificial intelligence to projects with positive impacts on society. The initiative is a joint effort between Google.org, the company's philanthropic arm, and Google engineers and researchers. It's kicking off with the AI Impact Challenge, which will dole out $25 million in grant funding as well as access to Google resources to global nonprofits.

"Artificial intelligence is not only helping people create more useful products," Google's AI chief Jeff Dean said Monday. "It's also emerging as a useful tool for improving the society we live in."

The initiative comes as Google and other technology giants are facing hard ethical questions about the applications of their technologies. This year, for instance, Google has had to answer to both internal and external critics about its work to provide drone technology to the Pentagon, as well as its cooperation with the Chinese government.

Dean told reporters that the new AI for Social Good initiative wasn't created to counter employees' concerns about these projects. "This has been in the works for quite some time," he said.

Still, the initiative does aim to help Google adhere to the set of AI ethical principles it laid out following the blowback it received over its Pentagon contract. The initiative, Google says, focuses on the very first objective Google set forth: "be socially beneficial."

"With AI, we have another tool to explore and address hard, unanswered questions that have a societal impact," Dean said.

Meanwhile, as Google highlights its positive projects, it doesn't intend to back away from potentially controversial contracts.

"We're entirely happy to work with the US government and other governments in ways that are consistent with our principles," Dean told reporters Monday, when asked about how Google may end up working further with the Pentagon.

Google and Google.org conceived of the AI for Social Good initiative together, so when Google chooses projects to support, they'll find the appropriate Google engineers and researchers to bring on board. Some engineers and researchers may end up working full time to support one of the "AI for Social Good" projects, while others may devote just a day or two a week to the initiative.

The $25 million financial commitment is a drop in the bucket for Google, but it could have an outsized impact on the nonprofit world, in areas like health care, agriculture, civic society, or environmental conservation.

Dean showcased one such project: an augmented reality microscope that can help pathologists more easily spot cancer cells. The project has yet to clear the regulatory hurdles to be deployed in the US. However, deployment in the US isn't really how the technology could have the biggest impact, Bob MacDonald, technical program manager for Google's healthcare AI team, told ZDNet. 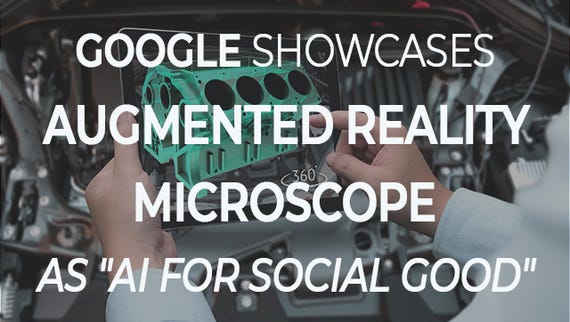 Given that about 70 percent of pathologists are based in the US, Google could advance its "AI for social good" mission by finding deployment partners in under-served places in the developing world, MacDonald said.

Additionally, Google.org strives to open source all of the projects it funds, Jacquelline Fuller, president of Google.org, explained to ZDNet.

For instance, Google.org has worked with the anti-human trafficking organization Thorn to develop AI tools to spot online ads placed by human traffickers.

"The problem is that there's like 200,000 new ads uploaded every single day in the US," Fuller explained. "There's way too much information to go through manually."

Google gave the organization $2.5 million and access to Google resources, and now the Spotlight tool they developed is in use in all 50 states and Canada. It's helped to find more than 28,000 trafficking victims.