Google's new Nexus 7 tablet is available from today in the UK, France, Germany and Spain, alongside price cuts for the Nexus 4 smartphone. 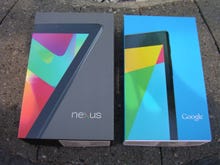 Hands-on with the new high resolution Nexus 7 (Gallery) Google's Nexus 7 was made available early and many of us were able to pick one up at Best Buy, Staples, and other local retailers. The Nexus 7 is a major improvement over the 2012 model.

In the UK, consumers can buy the Asus Nexus 7 directly through Google's Play store, or through retailers Currys PC World, Amazon, Tesco, Argos and John Lewis. The 16GB Nexus 7 model with wi-fi costs £199 ($308), while the 32GB wi-fi device will set buyers back £239 ($370). Prices are currently consistent at all outlets, although Argos has not listed the device yet.

Released in the US in July, the 290g 7-inch tablet ships with Android 4.3, Jelly Bean, and has a 1920 x 1200 resolution screen with an 178-degree viewing angle, a Qualcomm Snapdragon S4 processor, 2GB of RAM, wireless charging and dual-band wi-fi.

Join Discussion for: Google's Nexus 7 arrives in the UK, France,...