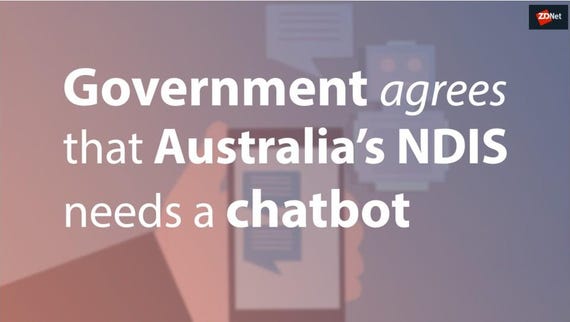 Australia's National Disability Insurance Scheme (NDIS) will be getting a chatbot, after the Joint Standing Committee on the NDIS flagged that having such technology in place would reduce the frequency of calls and improve "interactive problem solving".

Following the committee's report on the NDIS ICT Systems [PDF], the federal government on Thursday agreed to implement all six IT-related recommendations.

"While the NDIS is designed to assist people with disability to achieve their goals while exercising choice and control, it is acknowledged a number of challenges relating to ICT remains and requires ongoing work," the government wrote in its response [PDF].

Specifically, the joint committee asked that the National Disability Insurance Agency (NDIA) co-design, with end-users, a "fit-for-purpose chatbot for the website and portals".

"The committee believes that the absence of a systems-based tool, which would integrate NDIS business processes, policies, and guidance to staff via a central repository is contributing to the current inability of [the NDIS Contact Centre], NDIA, and LAC staff to provide consistent and clear information to prospective and existing participants and service providers," it said.

The committee reported that participants and service providers were critical of the NDIS website and the NDIS Contact Centre, mostly around the struggles involved in finding adequate information or having queries answered in a satisfactory and timely manner.

It won't be the agency's first artificial intelligence play, however.

The NDIA first announced the development of a virtual assistant, called Nadia, in February of 2017.

Facing Senate Estimates in June, Department of Human Services (DHS) CIO Gary Sterrenberg said Nadia presented a lot of promise to the NDIA as well as the scheme's participants, but he refused to give a projected go-live date.

He admitted there was a hold-up with Nadia, which he said included IBM's Watson cognitive intelligence platform, in particular its voice streaming capabilities.

Sterrenberg said the agency was involved in "ongoing debates" with a number of vendors to make sure the end-to-end experience of Nadia was at a level that did not disadvantage the user. He said otherwise it was likely it would fail.

In September 2017, it was revealed that the NDIA had put its virtual assistant rollout on hold, with reports surfacing that those working on the project were concerned issue-plagued technology-based initiatives from the government had "taken their toll" on Australia's appetite for risk.

The project up until that time had cost the government AU$3.5 million, according to the ABC.

"Having robust and fit-for-purpose ICT systems can greatly assist the NDIA in meeting its operational targets and delivering quality outcomes for participants," the committee wrote. "Importantly, ICT systems must also support in an effective way the NDIA internal operations to ensure consistency of decisions and advice across the agency."

In a bid to further fix the call centre woes, the NDIA dumped DHS as its service delivery partner, moving to Serco as its new provider for contact centre services in June last year.

"Following the transition, the agency has successfully improved service levels to participants and providers," the government wrote.

Other recommendations made by the joint committee, and agreed upon by the government, include the implementation of a tracking system to enable end-users to track the status of their queries; an "urgent" recommencement of work on the development and implementation of its knowledge-management system; and a review of all documents, including guidelines, forms, and policies prior to their upload onto the new website to ensure that they are "current, clearly dated, fit-for-purpose, and written in clear language".