If you don't want to use your fingers with a capacitive touch-screen, there are now an increasing number of compatible styluses — devices that take advantage of the physics of capacitive screens to give you a choice of innovative and unusual designs. They take many forms, from utilitarian plastic to jeweller-design titanium.
Written by First Take , Previews blog log-in on July 18, 2011

If you don't want to use your fingers with a capacitive touch-screen, there are now an increasing number of compatible styluses — devices that take advantage of the physics of capacitive screens to give you a choice of innovative and unusual designs. They take many forms, from utilitarian plastic to jeweller-design titanium. We've been playing with a handful of different pointers, trying then out with different tablet devices.

Unlike Wacom or resistive panels, capacitive screens have a relatively low touch resolution, and need to interact with a large area. That means you won't get the fine point of a Wacom stylus (or for that matter, the smooth strokes that come from sampling at a higher resolution than the screen itself). That means that a capacitive stylus needs to find different ways of showing you just where you're writing on screen. As capacitive screens improve and get more sensitive, we're going to see more and more styluses, especially for use with slate devices. It's a lot easier to write on a slate than typing on a virtual keyboard.

So what do the latest styluses look like? We took a quick look at four different stylus designs, all ready for your shiny new tablet devices — whether they're Android, iOS or Windows.

Pen or stylus? Just pick an end of the Kensington Virtuoso

Kensington's £19.99 Virtuoso Touch Screen Stylus is perhaps the most conventional of this batch. Like the Wacom Bamboo we looked at recently, it's a pen-like rubber-tipped device. Although it's thinner and slightly longer, it's oddly balanced and not as comfortable. That's because it's also a conventional pen — just pull off the cap to unveil the ball point beneath. It's a useful combination, and if your tablet's battery runs out you can at least use the pen to scribble on the back of a coffee receipt. The capacitive stylus is accurate, although the wide and short rubber head does make it hard to see just where you're writing. Still, it's smooth and slides well on most screens, interacting with Apple, Samsung and HP devices well. 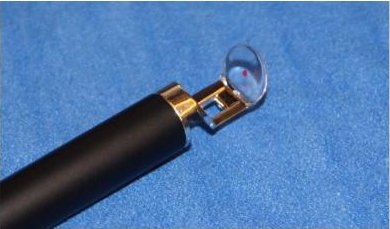 DAGI's styluses take an interesting approach to working with capacitive screens. Instead of a rubber tip, there's a clear disk with a red dot in the middle mounted at an angle on a slightly flexible neck. That dot is meant to be the tip of the stylus — although that's going to depend on the size of your screen's capacitive grid and how well its software is calibrated. We looked at two different DAGI styluses: the $23 P501 is much the same size as a normal pen for tablet devices, while the $23 P101 is thin and light for phones. We're a little worried about just how durable those tips are, although the larger pen does have a clip on protector to cover the tip. The angled tip makes the DAGI styluses comfortable to hold and use, and the smooth plastic of the disc slides easily on most screens. You'll need to hold the pen at the angle of the tip, which could mean changing your usual grip.

Not a dental exam, this is the distinctive oStylus

The most unusual (and certainly the most attractive) of the styluses we tested was oStylus's device. Looking rather like a dentist's mirror, it's a ring of metal with a vinyl slider on the end of a stainless steel handle, held in place with two titanium wires. It's comfortable to use, and works well with a range of different capacitive screens. The only real problem is that, while the stylus assumes that the centre of the ring is where you're going to be writing or drawing, the actual position of the ink is down to the software on your tablet — and that could be anywhere (usually under the ring). That leaves the $37.50 oStylus less accurate than it might seem at first. It won't matter if you're just using it for art, but it won't work for handwriting. 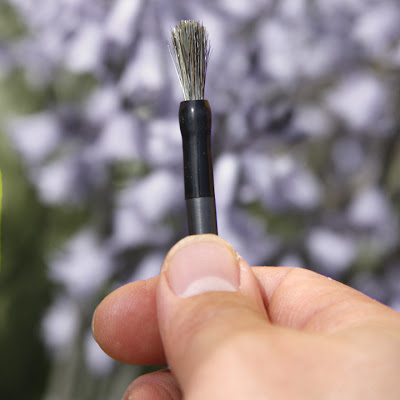 An alternative approach comes from Nomad, with its $24 Brush. Looking just like a paintbrush with a wooden handle, the Nomad Brush is designed for artists working with tablet devices. Its conductive strands give it the feel of a traditional bristle brush — which means you'll need to remember that the paint on-screen is down to the brush settings of your application, not the Nomad. That can be a little confusing, but it's something you get used to very quickly. The Nomad Brush is targeted at a very specific market, but it was still our favourite of the styluses we tested: it's comfortable, innovative and very easy to use. Three versions are available: a mini brush, and long- and short-tip full-size brushes.