The New York City Taxi and Limousine Commission and Sense Networks released an app for the iPhone and Android devices that uses taxi location data to allow New Yorkers to catch cabs.
Written by Larry Dignan, Contributor on March 30, 2010

You will soon be able to find and hail a cab with your smartphone. 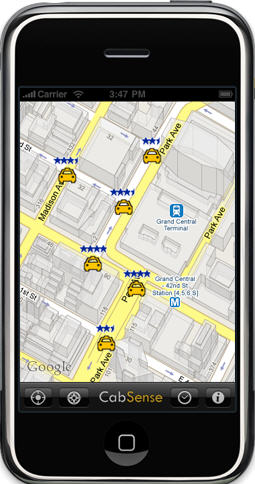 The New York City Taxi and Limousine Commission and Sense Networks on Wednesday released an app for the iPhone and Android devices that uses taxi location data to allow New Yorkers to catch cabs. The app, dubbed Cabsense, uses data and a algorithm to point New Yorkers to corners where they have the highest chance of finding a cab.

Cabsense takes the user's location and gives them star---one to five stars---ratings to tell them where to hail a cab. The views in the app range from a radar view, time slider to plan ahead at a later time and taxi hailer, which is a bit odd. To get the taxi hailer you shake the phone and it will whistle for them. Umm, I think I'll stand there with my hand raised thank you.

After all, location data is everywhere. Cars, buses, taxis, mobile phones, cameras, and personal navigation devices all beacon their locations thanks to network-connected positioning technologies such as GPS, WiFi and cell tower triangulation. Many companies are going to be turning their algorithms on this data to try and make sense of it.