I spent some time yesterday afternoon with Vodafone taking a look at its 360 service. Due to go live tomorrow, this service puts people at the heart of your mobile phone.

It is hardly a new idea, but Vodafone obviously thinks it needs to push itself forward in this area, believing that connected services based on aggregating social networking tools are the way forward.

The launch handset is Samsung’s full screened, touch enabled H1. Exclusive to Vodafone it is a well specified phone. It has a 3.5-inch touch enabled OLED screen, 16GB memory, WiFi, GPS, a maximum talk time of over 400 minutes on 3G, and a 5 megapixel camera. The H1 is one of two exclusive Samsung handsets to offer Vodafone 360, with the second handset to follow shortly. The service will also be offered on other more widely available handsets going forward. 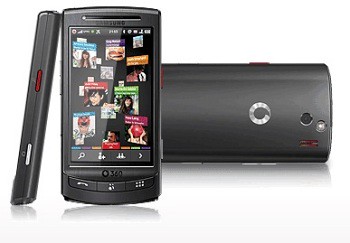 The H1 runs the Lunix based LiMo operating system, and the user interface is designed primarily to appeal to a consumer market at the outset. It takes a slightly tangential approach to things, with the home screen offering views of your contacts around with you can pan with a finger. Those you contact most often are shown first, you need to pan through the list to get to those you contact least. Choosing a contact lets you see their current level of connectedness across a range of social media and initiate a contact using the method that suits you best.

Another screen, easily accessed via a hard button on the handset, offers a mix of application shortcuts and live data. A shortcut to the music player can sit right next to a display of live weather data, for example, and you can enlarge the size of the data carrying applications so that they stand out.

It is an unusual approach to user interface design, which tends to rely on a home screen offering time, date, maybe live weather, and some user identified application links. Unusual but actually, for those who see their handset as a link to their friends, very sensible.

Among the other services that form crucial elements of Vodafone 360 is an app store and access to Vodafone’s music store. Vodafone 360 is all about sharing. Part of the services includes a Web store which backs up the handset’s contents automatically and through which you can share things like photos, music and your location with others. Providing they are signed up.

That’s the rub for Vodafone. 360 will only really be a success if people sign up to it and join the community. Which means Vodafone needs to push them hard.

The lure at launch is the H1 plus Vodafone 360 services for contracts from £35 a month. Details here.