The Lumia 550 arrives as Microsoft's most affordable Windows 10 smartphone to date, following its recently launched higher-end Lumia 950 and Lumia 950 XL.

The 550, which boasts 4G and a 4.7-inch display, went on sale in Europe on Monday for €139 and will be available in other regions in coming weeks, according to Microsoft.

With the emphasis on affordability, the Lumia 550 features an HD display at 1,280 x 720 pixels and 315 pixels per inch, a five-megapixel main camera and a two-megapixel front camera. 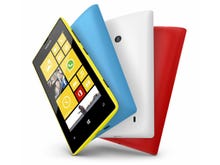 It's powered by a 1.1GHz Qualcomm Snapdragon 210 processor and comes with 1GB RAM and 8GB internal storage, with a MicroSD slot that supports up to 200GB additional storage. The 2,100mAh battery is replaceable.

The Lumia 550 contains most of the main additional features of the Lumia 950 and 950 XL, such as Glance screen.

However, a few headline features are missing, such as Windows 10 Continuum, which means buyers won't be able to use Microsoft's Display Dock to run the phone as a PC when connected to an external display.

Analyst firm IDC puts the Windows Phone share of worldwide smartphone shipments for 2015 at only 2.2 percent, due largely to a lack of devices from OEM partners. The analyst doesn't expect Windows 10 to give it the boost Microsoft is hoping for.

However, in Europe Windows Phone has historically fared much better than in the US and China, thanks mostly to budget Windows Phone handsets like the Lumia 520, so it stands to reason that's where Microsoft will debut the Lumia 550 first, ahead of holiday season sales.

But even in Europe, Microsoft has seen the Windows Phone share of sales decline in key markets like the UK.