Homeland Security's ability to shut down cellular and wireless networks in times of crisis, such as the potential of a remote detonation bomb threat isn't new. Exactly how and when it can be used, however, must be disclosed, thanks to a new ruling by a Washington D.C.-based court. 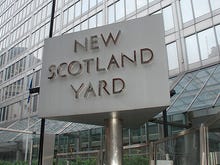 London's police service can not only track and trace your mobile phone, but remotely shut it down and intercept phone calls and text messages, it has emerged.

The U.S. District Court for the District of Columbia rejected Homeland Security's argument that its reasoning and protocols for the dubbed "Internet kill switch" were exempt from public disclosure.

The court ordered the release of the protocol in the next 30 days. Homeland Security can appeal the decision, but it's not clear if the agency will.

This protocol is described in the court filing as an "emergency wireless protocol... codifying a shutdown and restoration process for use by commercial and private wireless networks during national crises." Specifically, the protocol can be used to "deter the triggering of radio-activated improvised explosive devices."

EPIC filed a request for the documents under Freedom of Information Act in July 2012. The federal agency released a heavily redacted and near-unreadable document, not first after saying it could not find the records. Homeland Security said the disclosure would reveal "techniques and procedures for law enforcement investigations or prosecutions."

The privacy group took legal action in order to reveal the full text of the protocol.

You can read the full opinion below: