They've already been blamed for killing off the netbook , but now it seems the popularity of cheap tablets has taken billions out of the global device market.

Analyst firm Gartner had predicted that the global IT device market would be worth $706bn in 2013 when it released its quarterly forecast figures last October. But it now forecasts the IT global device market for 2013 will be worth $40bn less, at $666bn.

The reason for this lower valuation is because an increasing number of people are choosing to buy budget tablet devices over expensive PCs. 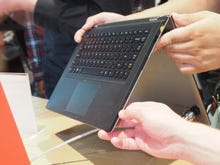 Hybrids are on the rise: Which design will win?

The flood of convertible tablets and ultrabooks at IFA shows we're going through a creative boom in the evolution of the PC. There are many options out there — which ones will pull in the buyers?

"The big change in the forecast this quarter is that we've reduced the overall devices forecast growth rate quite a bit because of the impact of tablets on the market," Gartner VP Richard Gordon told ZDNet. "It makes the overall market, from a device perspective, less lucrative."

While a laptop can cost upwards of £1,000, the vast majority of tablets can be purchased for considerably less. For example, the iPad range starts at £269 and Google's Nexus tablets start at £159.

"If you look at the long-term growth rate of the traditional PC market, it is starting to decline in 2013 and we're expecting it to be flat at best for the rest of the forecast," said Gordon. In contrast, Gordon said he expects the tablet market to continue with its high growth over the next five to 10 years.

"There is a real transition going on between the traditional PC and the tablet so there are more and more tablets being bought in both mature and emerging economies and because they're lower cost they take money out of the market," said Gordon.

IT spend going up?

Meanwhile, Gartner predicted that total worldwide IT spend in 2012 will rise by 4.2 percent to $3.7tn. Gordon claimed 2013 will see more money spent on IT than in 2012 for a number of reasons.

"There is a real transition going on between the traditional PC and the tablet" — Richard Gordon, Gartner

"The uncertainties that we've seen over the past year, in terms of the US political and economic situation, the Eurozone crisis and so on, are still there," he said.

"But we're more optimistic that we're seeing a bit more resolution to some of those and a bit more clarity, which is what businesses need for investment confidence and what consumers need for consumer spending."

However analyst group Tech Market View disagreed with Gartner's predictions. Richard Holway, chairman of Tech Market View, argued in an article published on the company's website on Friday that global IT spend is likely to be closer to one percent for 2013.

"We believe that IT is deflationary. All the trends from off-shoring, cloud, BYOT, commoditisation etc actually deflate IT spend," he said.