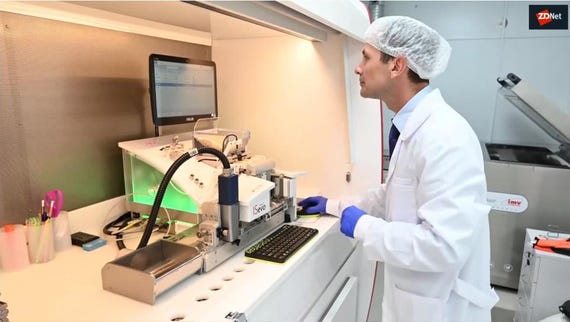 So your company is looking to automate. Now what?
Watch Now

Robots are spreading to a variety of industries and sales in the sector are booming. The International Federation of Robotics cites worldwide robotics installations surpassing 400,000 in 2018, the latest year for which data has been released. That figure represents an average of 23% growth each year from 2013.

This proliferation in use cases has come with an explosion in vendors and automation technology categories, and it can be tricky for CTOs and other stakeholders to know where to start. For a general overview of what kinds of robots are becoming commonplace in the enterprise, a great first step is our executive guide on the subject: Robotics in Business: Everything Humans Need To Know.

But there's another step in the process, which is identifying a suitable vendor. According to Josh Kern, a lead analyst at Lux Research, which recently released a framework for choosing robotic vendors that I found insightful, "Companies should follow a structured framework to identify a robotics vendor. If an off-the-shelf solution doesn't exist for a certain use case, companies should evaluate vendors on their technical capabilities and customization options."

Those criteria are diverse, but in general come down to issues that will be defined by the task, such as how precise a robot needs to be (think biochemistry compared to welding) and how accessible the interface to someone who doesn't necessarily have an engineering degree. But another big determiner is customization needs. Will an off-the-shelf platform work, or does your job or industry require a purpose-built machine?

Why consider a robotic solution?

There are lots of reasons a company might entertain automating processes with robots. According to Kern, the main reason is a labor shortage. Prior to COVID-19-related slowdowns, a competitive labor landscape and rising costs of living in many countries around the globe made hiring tough for skilled and unskilled positions alike. Automation, which often promises ROI efficiencies over time, particularly when it comes to repeatable tasks, is an attractive solution.

"Robots can save money over time, not just by directly eliminating human labor, but by cutting out worker training and turnover," according to the Lux report for which Kern served as the lead. "Most companies turn to automation and robotic solutions to deal with labor shortages, which is common in industries with repetitive tasks that have a high employee turnover rate. Companies also frequently use robots to automate dangerous tasks, keeping their employees out of harm's way."

Post-COVID-19, there are also considerations like sanitation and worker volatility. As I've written, the perception of automation is changing almost overnight. Where robots were once, very recently, associated primarily with lost jobs, there's been a new spin in the industry to tout automation solutions as commonsense in a world where workers are risking infection when they show up at physical locations.

A framework for choosing a vendor

What I like about the Lux Research framework is that it splits the task into three primary considerations: what the robot does, how sophisticated it needs to be, and how customized a solution is necessary.

The first branch on our decision tree deals with what the robot does. In Lux's example, the functions are split into moving, picking, assembling, and inspecting. Those are pretty good general buckets, although of course, it's possible to get more granular than that. In the chart below, a CTO or operations lead would start by identifying the task they're thinking of automating and choosing the correct function category.

Next comes the autonomy maturity level, which you might think of as the sophistication of the installation. For picking and placing applications, Lux envisions Level 3 autonomy maturity thusly: "Collaborative robot arms are used to pick an object of a given size/shape/ material with a fully predictable pickup location." Move up to Level 4 and you jump in sophistication: "Robot arms can pick various objects never seen before and/or in an unexpected pickup location or orientation." And finally, at Level 5, "Robot arms can pick objects in extremely unstructured environments; some may be able to intentionally manipulate the orientation of objects."

Lux's framework, conceived literally as a chart, funnels prospective adopters to pre-populated firms, which is a good start but certainly not comprehensive. Even so, conceptualizing the decision-making process this way is extremely useful when conducting a larger search for a prospective automation vendor.

The final variable is the level of customization that might be involved, which generally correlates to the size of the investment in both time and money. Robotically mature industries like logistics will have a significant number of off-the-shelf platforms generally available. By contrast, industries like chemicals and energy will need to look to specialty contractors and maybe even research organizations, which may be willing to partner on automation challenges that have groundbreaking commercial potential."

"Research organizations and robotics contractors offer the highest precision and most autonomous robots," says Kern, whereas "off-the-shelf platforms can be deployed quickly, but are generally only used for a single-use case."