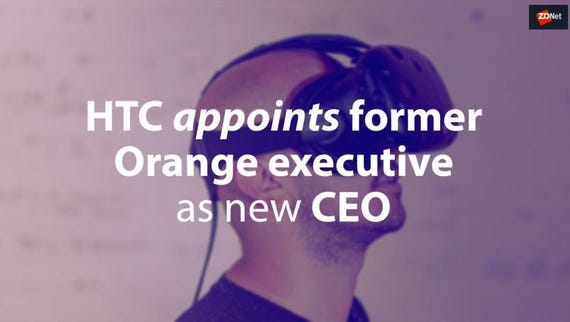 HTC has appointed Yves Maitre as CEO effective immediately, taking over from the role that has been held by Cher Wang since 2015.

"When I took over as CEO four years ago, I set out to reinvent HTC as a complete ecosystem company and lay the foundations for the company to flourish across 5G and XR. So, now is the perfect time to hand over the stewardship of HTC to a strong leader to guide us on the next stage of our journey," said Wang, who will continue to serve as chairwoman of the HTC board.

The company said resuming as chairwoman, Wang will be focused on "future technologies", including its Vive Reality initiative.

Maitre joins the company from French telecom firm Orange after more than 14 years with the company. Most recently, he served as EVP of Consumer Equipment and Partnerships and was charged with overseeing Orange's connected technology strategy and business.

"Across the world, HTC is recognised for its firsts across the mobile and XR space. I am incredibly energised to grow the future of both 5G and XR alongside HTC employees, customers and investors," he said.

During the second quarter, HTC reported that despite earning NT$2.8 billion in revenue for the period, it experienced an operating loss of NT$2.5 billion and net loss of tax of NT$2.2 billion.

It also noted that during the period, the company launched its Vive Enterprise Solutions business to deliver commercial applications of VR across key verticals, and its unlimited subscription service for VR, Viveport Infinity.

The company's focus on technologies such as VR has been a priority since Google acquired some of the company's talent and intellectual property at a cost of $1.1 billion back in 2017.

HP's latest Reverb virtual reality headset is targeted at industries such as healthcare, architecture and product design as enterprises move from pilots to production.

Perhaps the biggest perk of the VIVE Focus Plus is that companies can easily port their PC VR based content to HTC's new system.

VR headsets are back on the attack -- with new models that offer higher resolution for precision work and gaming. However, the long-promised convergence between virtual reality and augmented reality appears no closer to becoming market reality.