The ChaCha is HTC's first attempt at an Android handset with a miniature QWERTY keyboard. It is also the first of two announced handsets from HTC to feature a dedicated Facebook button. The market is clearly the younger, social-media-friendly user, and HTC must surely have more than half an eye on some of the BlackBerry owners in this segment. 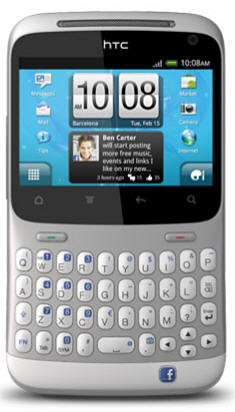 Past experience with handsets that drop Android into a smallish, landscape-format screen is not good. The operating system was not made to be squeezed like this, and the ChaCha's 2.6in. 480-by-320-pixel screen does Android no favours. 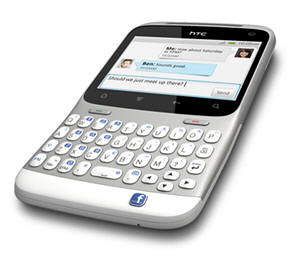 The screen is actually the least amenable part of the ChaCha. The chassis is a solid mix of metal and plastic, and its slight bow means the screen sits at a very viewable angle when you're typing on the well-made mini-keyboard.

The keyboard is well made and comfortable to use at speed. In fact, it's one of the best we've seen on a Blackberry-style smartphone.

The Facebook button has its useful features. Hit it when you are in camera mode and your shot is dropped into the Facebook image-upload screen. Long press it and you're into Facebook Locations. But tap it and you're taken to the status update screen — you can't get into Facebook proper until you've made an update. For those who are constantly updating their status this will be a boon. For the rest it may be an irritation.

The HTC ChaCha costs around £250 (inc. VAT) and for the price its specifications are sound. There's an 800MHz processor, Android 2.3, 512MB of storage and a microSD card slot, plus Wi-Fi, Bluetooth, HSPA, GPS and a 1,250mAh battery that should see you through a working day. A 5-megapixel camera sits on the back and there's a VGA-resolution camera at the front.