HTC has announced its first 3D smartphone, the EVO 3D. With a screen viewable without 3D glasses, it rivals the already announced but serially delayed (although due soon) LG Optimus 3D, and is expected to be available by the end of July.

The size and weight are in no small part dictated by the presence of a 4.3in. 960-by-540-pixel screen and by twin 5-megapixel cameras on the back of the chassis. These can be used to shoot 3D stills at 2 megapixels or standard 2D stills at 5 megapixels. Both 2D and 3D video footage is recorded at 720p. 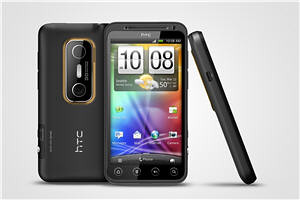 Other 3D features include 3D menus and widgets. Of course, the iconic HTC Weather app has had a makeover and promises full-screen 3D animations. The EVO 3D comes with HTC's newest app, Watch, which lets you buy or rent movies to watch on the handset. HTC will need to ensure there is a stream of 3D content available when the device launches.

Other core specifications include a 1.2GHz Qualcomm Snapdragon processor, 1GB of both RAM and ROM, Android 2.3 and the new HTC Sense 3.0 GUI. HSPA, Wi-Fi and GPS are present, while DLNA support and HDMI-out help to establish high-end credentials.

A 1,730mAh battery promises long life, but we’ll have to reserve judgement till we've given the EVO 3D a thorough test. And of course, we’ll expect to give the 3D functionality a workout too.