So, I spent some of yesterday taking a first quick look at HTC’s new Android handset, the Hero. You’ve got to admire the company’s chutzpah for coming up with a name like that.

Both T-Mobile and Orange are going to carry it. It’ll be T-Mobile’s second bite at the Android cherry, Orange’s first. And with Vodafone already sporting the HTC Magic (which I reviewed), it leaves O2 and 3 out in the cold as far as Android is concerned.

The Hero is the first non-Google branded Android handset and if you want to see what it looks like and learn a bit more about it, then check out David Meyer’s excellent photo story.

After my brief sojourn with the Hero I have to say I am very impressed with what I saw, and with HTC’s ongoing approach to smartphone development. 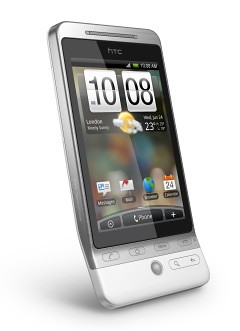 That approach is typified by the new user interface. Called HTC Sense this is all about bringing what the user wants to the foreground. So, for example, there are seven ‘home’ screens through which you flip using fingerpans.

You can drag application icons onto them, but more interestingly they can be populated with large widgets that aren’t just links to applications but that show content. So, for example, a Twitter fan can see recent tweets just by flipping to the relevant home screen. This is a feature that third party Android applications can exploit too.

Then there is stuff like being able to access email and texts direct from the contact data screen, so that you can see ‘conversations’ with individuals. And the rather obvious but extremely useful way in which the search button works as you’d expect it to in whatever application you are currently running.

Indeed, that is the point. HTC wants users to be able to get to what the Hero offers without having to think too much. It is all about ‘zero touch’, or at the minimum ‘one touch’ usabilty. And HTC Sense is an ethos that HTC will embed in all its devices going forward.

The smartphone wars are hotting up.